Pieter Coetzé and Christian Sadie also get in on the action 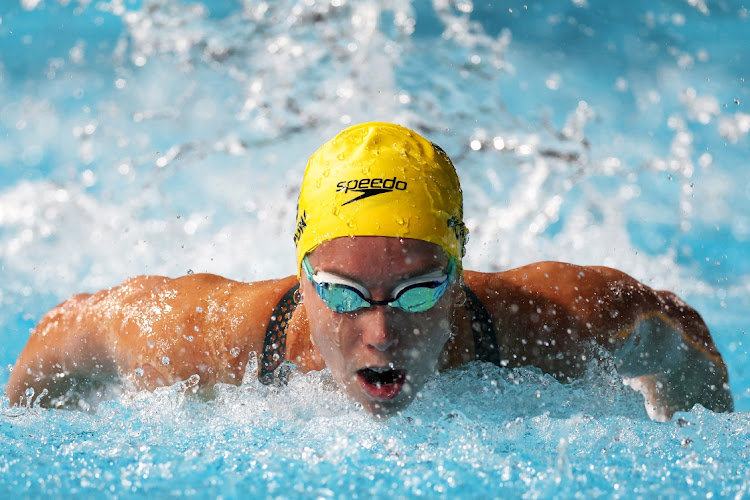 That took the overall tally for the day to six, alongside judoka Michaela Whitebooi’s gold and two bronze from Charne Griesel in the judo and Rooikrantz in gymnastics.

For Gallanger, who tied for second spot with Australian Holly Barratt behind Emma McKeon, the Australian superstar, in the 50m butterfly, this moment has been a long time coming after a career that featured disappointing results and career-threatening injuries.

But the 23-year-old has kept battling her way back through the pain and disappointment to reach her first major podium.

Coetzé, who won the 100m backstroke title at the weekend, had to settle for second spot in the 50m backstroke, unable to catch up on New Zealander Andrew Jeffcoat’s lightning start.

Chad Le Clos, after losing his 200m butterfly crown on Sunday, showed he’s ready to fight to keep his 100m butterfly crown, toying with his rivals as he won his semifinal in 51.64, twice looking across at the field on the second lap.

Le Clos had finished fourth in his morning heat in a slow 52.85, and his gamesmanship in the evening probably allowed Australian Matthew Temple, the winner of the other semifinal, to post the quickest time 51.52.

Le Clos is looking for a hat-trick of titles in this event, having won in 2014 and 2018, and having equalled the all-time Games haul of 18 medals, he is aiming to push that to 19 on his own.

Michael Houlie qualified for the final of the 50m breaststroke, finishing second behind Australian Sam Williamson in his semifinal in 27.39, the third quickest time overall.

In the heats Houlie had shared the fastest time with English icon Adam Peaty, both going 27.10, but the US-based student slowed in the evening after a poor start, while Williamson ran through unchallenged in 27.01.

Peaty, who failed to medal in the 100m breaststroke on Sunday evening, won his semifinal in 27.03.

As strange as it may seem, the owner of the 25.95 world record has yet to win the Games 50m breaststroke title, having finished second behind SA’s retired star Cameron van der Burgh at Glasgow 2014 and Gold Coast 2018.

With Peaty off-colour at this gala, if Houlie can hit his straps in the final he could condemn the Briton to another golden miss.

Aimee Canny advanced to the women’s 100m freestyle final, her 54.78 on Monday seeding her sixth.

Tatjana Schoenmaker laid down a world-class marker as she clocked the fastest time in the 200m breaststroke heats at the Commonwealth Games on Sunday ...
Sport
1 week ago