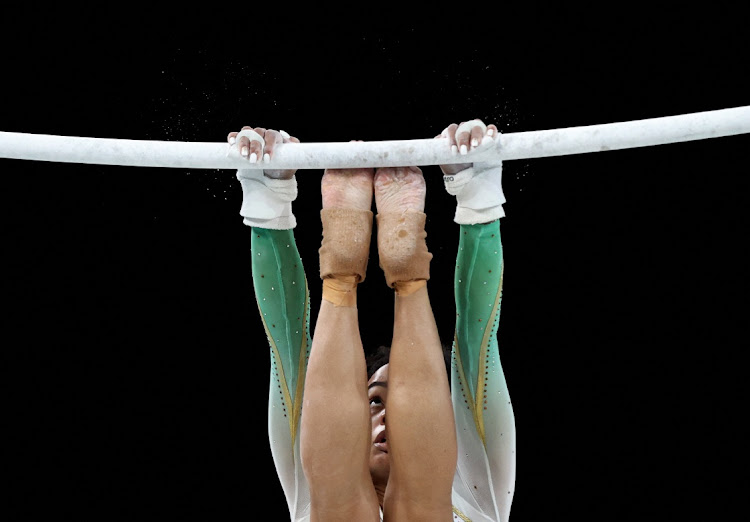 Caitlin Rooskrantz in action in the final on Monday.
Image: REUTERS/Stoyan Nenov

Judoka Whitebooi clinched the victory over India’s Shushila Devi Likmabam with a golden score Waza-ari after they’d ended without scoring in regulation time.

Whitebooi swept into the final of the women’s 48kg competition to guarantee at least a silver medal.

She beat Ashleigh-Anne Barnikel of Wales in the quarterfinals and then in the semifinals she dispensed of England’s Amy Platten, the bronze medallist at the European under-23 championships last year.

Whitebooi lost in the opening round at the Tokyo Olympics after being drawn to face the world champion, but that experience helped her.

“I think Tokyo really helped me,” she said. “It was almost the same set-up, the competition venue. So when I stepped in here I remembered Tokyo, so it really motivated me to win today [Monday].”

Likmabam was no easy opponent in the final, having taken silver at Glasgow 2014, but eight years later she returned to the same position on the podium.

When I’m off the mat I’m obviously the girly girl, but when I’m on the mat I really believe that I’m like a bulldog, I’m a monster

Whitebooi was shorter and resembled a terrier on the mat.

Griesel’s journey to the podium started with a loss to Yasmin Javadian of Northern Ireland, but she beat Sofia Asvesta of Cyprus in the repechage to move into the bronze medal match.

Both had ended with totals of 13.433, but the South African was given the nod because her execution score of 7.633 was higher than her rival’s 7.433. Georgia-Mae Fenton of England won gold with a total of 13.900 and Australia’s Georgia Godwin took silver on 13.500.

SA gymnasts have made the podium in other events at the Games.

And then lawn bowlers Johanna Snyman, Esme Kruger, Bridget Calitz and Thabelo Muvhango edged past Fiji on the final 15th end to win their semifinal and advance to the final on Tuesday. They too cannot do worse than a silver.

Snyman and Kruger were part of the four that won silver at Gold Coast 2018.

The para women’s pair of Desiree Levin and Victoria van der Merwe went down 12-19 to Australia in their semifinal, but they will have a crack at the podium in the bronze medal playoff against England on Wednesday.

In other action, the men’s beach volleyball side of Grant Goldschmidt and Leo Williams went down 21-12 21-12 against Australia’s Chris McHugh and Paul Burnett.

Tatjana Schoenmaker laid down a world-class marker as she clocked the fastest time in the 200m breaststroke heats at the Commonwealth Games on Sunday ...
Sport
2 weeks ago