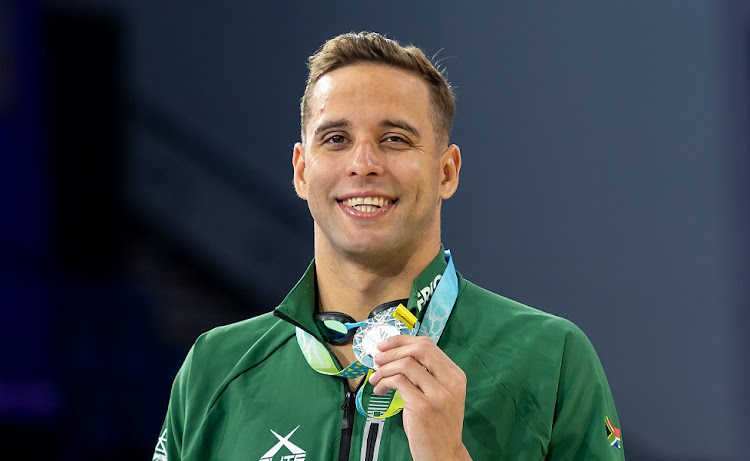 Chad le Clos of SA with the silver medal from the men's 200m butterfly finals at the 2022 Commonwealth Games at Sandwell Aquatics Centre in Birmingham on July 31 2022.
Image: Anton Geyser/Gallo Images

Swimmer Emma McKeon became the most successful Commonwealth Games athlete of all-time on Sunday, leading an Australian sweep of the women's 50 metre freestyle to claim a record 11th gold medal.

It was a night of milestones at Sandwell Aquatic Centre as moments earlier South African Chad le Clos had joined shooters Michael Gault and Phil Adams as the most decorated Games athletes ever when he snatched his 18th medal by picking up a silver in the men's 200 metres butterfly.

Australia then ended the evening with a bang, powering to gold in the women's 4x200m relay in a world record time of seven minutes, 39.29 seconds, smashing the old mark of 7:40.33 set by China at the Tokyo Olympics. Madison Wilson, Kiah Melverton Mollie O'Callaghan and Ariarne Titmus, with a brilliant anchor leg, came home a huge 12.69 seconds clear of Canada, who finished a distant second to take silver while England completed the podium.

McKeon’s 50m freestyle win follows earlier victories in the mixed 4×100 freestyle and women’s 4×100 freestyle relays to sit alone atop the gold medal table ahead of fellow Australian swimmers Susie O’Neill, Ian Thorpe and Leisel Jones. McKeon, winner of seven medals at last year's Tokyo Olympics, was able to share the landmark moment with Meg Harris and Shayna Jack who joined her on the podium taking silver and bronze respectively.

“It is special,” said McKeon. “It makes me reflect on the last eight years since my first Commonwealth Games and I can see how far I've come as a person and an athlete.”

Le Clos's milestone comes 10 years to the day since he beat American great Michael Phelps in the same event at the 2012 London Olympics. Swimming out of lane five, the same lane he beat Phelps from, Le Clos was beaten to the wall by Lewis Clareburt with a winning time of one minute, 55.60 seconds.

However, he could not be denied a place in the record books after finishing just 0.29 seconds back of the New Zealander to snatch silver ahead of England's James Guy.

Chad Le Clos won the 18th Commonwealth Games medal of his career in Birmingham on Sunday, but he lost the 200m butterfly crown he had held since 2010.
Sport
2 weeks ago

“I’m gutted not to have won, I’ll be honest,” said Le Clos, adding he plans to be top the podium before the end of the Games. “I would've cut my finger off to win tonight.

“It meant everything to me and my family — everyone’s in the stands, my friends flew out for this race.

“Fair play to Lewis, he had a great race. He said he watched me growing up and I said, 'man, did you have to do it on my day? Could you not have given me one more time?”

A three-time Commonwealth Games champion in the event, Le Clos looked like he might make it four leading with 50m to go but the 30-year-old would be overhauled down the stretch by Lewis, who adds the 200m butterfly title to the 400m individual medley gold he won earlier at the Sandwell Aquatic Centre.

The mighty Blitzboks rampaged through the Olympic champion Fijians 31-7 in Birmingham on Sunday night to claim the Commonwealth Games gold.
Sport
2 weeks ago