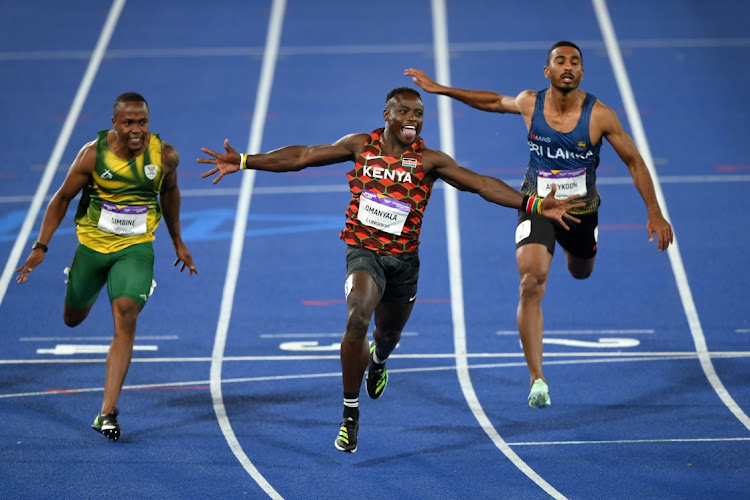 It was the fourth time the two of them had squared off, and Omanyala now leads their head-to-head count 4-0.

He had the better of Simbine in their first race in Europe last year, and days later he broke Simbine’s continental mark, lowering it from 9.84 to 9.77

Omanyala emerged victorious again in Germiston early this season and then he dethroned Simbine as the African champion in Mauritius in May.

And the muscle-bound Kenyan, who served a 14-month ban for doping in 2017, deserved it on his performance, to be honest. Omanyala got away faster and quickly opened a gap that neither Simbine nor anybody else in the field looked like closing before crossing the line in 10.02.

Simbine clocked 10.13 to edge out Sri Lankan Yupun Abeykoon by one-hundredth of a second.

That was one of two sprint silvers for Team SA on the track.

A few minutes earlier para-athlete Charl du Toit took the silver in the men’s T37/38 100m final behind Australian Evan O’Hanlon, the winner in a 11.23 Games record. Du Toit, however, also set a Games mark for his category with his 11.54 effort.

Rebecca Meder finished the opening backstroke leg in fourth, but Van Niekerk had pulled them to third by the turn and she was just off second spot, held by Canada, by the time she finished her leg.

Erin Gallagher kept them in third through the penultimate butterfly leg, but Aimee Canny was unable to hold off England’s Anna Hopkin for the bronze medal.

Australia won comfortably, with Emma McKeon pushing the career record for most Games medals to 20. At the start of Birmingham the mark was 18, held by two shooters, who were joined by Chad le Clos for two days before McKeon leapfrogged them all.

By late on Wednesday SA had 20 medals in all, but with their gold count having stagnated on six, they had been pushed down to sixth spot behind Australia, England, Canada, New Zealand and now Scotland. India were in seventh place on five golds.

Emotional Tatjana opens up about mental challenges at Games

Tatjana Schoenmaker has opened up about the psychological battle she waged against self-doubt in the build-up to the Commonwealth Games.
Sport
5 days ago

Team SA’s 4x100m relay team, considered a medal contender at the Commonwealth Games, is almost certainly out of the Birmingham showpiece after two ...
Sport
6 days ago