SA's golden Miné defends her world title at u-20 championships 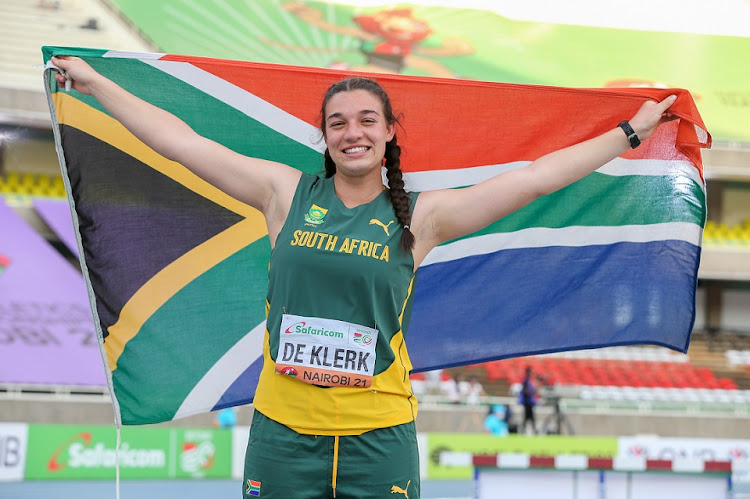 Mine de Klerk at the 2021 World Athletics u-20 Championships in Nairobi, Kenya.
Image: Roger Sedres/Gallo Images

The 19-year-old De Klerk, a University of Oregon student who went to school in Welkom, was the only competitor to clear 17 metres, which she achieved on her third heave to secure victory by 32 centimetres over Pinar Akyol of Turkey.

The SA champion won the age group title for the first time at the previous global meet in Nairobi last year.

She also won the discus silver then, and on Monday she qualified for Wednesday’s final with the eighth-best effort overall, a 50.12m throw.

Richardson, who took silver in Kenya, crossed the line third in 10.12 behind Botswana’s defending champion Letsile Tebogo, who raced to victory in a 9.91 world junior record. He broke the 9.94 mark he set at the recent world championships in Eugene, Oregon.

Bouwahjgie Nkrumie of Jamaica finished second in the sprint in a 10.02 national record.

Team SA’s 4x100m relay team, considered a medal contender at the Commonwealth Games, is almost certainly out of the Birmingham showpiece after two ...
Sport
2 weeks ago

Team SA is primed to scoop a gold-silver at the Commonwealth Games on Tuesday night in what could be a titanic battle in the women’s 100m ...
Sport
2 weeks ago