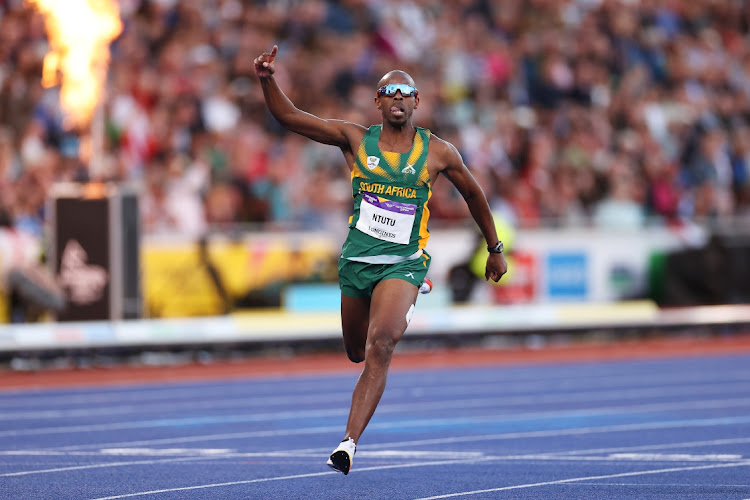 Visually impaired star Ndodomzi Ntutu defended his 100m crown at the Commonwealth Games in Birmingham on Thursday to give Team SA a much needed gold medal.

Jovan van Vuuren added a bronze in the men’s long jump, ensuring SA made the podium in this event for a third straight Games. Zarck Visser and Ruswahl Samaai ended second and third at Glasgow 2014 and Luvo Manyonga and Samaai first and third at Gold Coast 2018.

Van Vuuren briefly led the competition after his second-round leap of 8.06m, but Laquan Nairn of Bahamas overhauled him on his third jump as he landed on 8.08m.

India’s Sreeshankar Sreeshankar sailed to 8.08m on his fifth attempt, but he was placed second on countback.

But it was Ntutu who stole the show for SA.

Unlike his more famous sprinting compatriot, Akani Simbine, who struggled with his start on Wednesday, 36-year-old Ntutu flew out the blocks for an early lead and never looked like surrendering the lead.

None of those three, had they run in the able-bodied 100m, would have finished last, with more than 10 athletes going slower.

Ntutu admitted afterwards he had a few anxious moments in the race.

“Somewhere mid-race I had a speed wobble and I almost got tight but I held it well together.

“Today we’re standing here with a 10.82 seconds. This is my second-fastest time and I’m so proud of myself.”

Even with the two track-and-field medals pushing the nation’s tally to seven gold, seven silver and eight bronze, Team SA remained sixth on the table behind Australia, England, Canada, New Zealand and Scotland.

Earlier, Zeney van der Walt ran well as she finished second in her 400m heat to advance to Saturday’s final.

She put her foot down only in the second half of the race to clock 55.10 behind Rushell Clayton of Jamaica in 54.93.

Jamaica will have three runners in the final, with Van der Walt’s old foe from the under-20 championships, Shiann Salmon, winning the other heat in 55.30.

Van der Walt beat Salmon for the age-group crown, but as seniors the Jamaican has a vastly superior personal best by almost a full second, at 53.82 to 54.81. The other two Jamaicans have also been under 54 seconds.

In other action, the netball Proteas beat Scotland 65-46 and the men’s hockey team edged New Zealand 4-3.

Akani Simbine saw the silver lining in his 100m second place at the Commonwealth Games in Birmingham on Wednesday night, saying he was happy to make ...
Sport
2 weeks ago

Middleweight Simnikiwe Bongco survived a knockdown to secure SA’s first boxing medal at the Commonwealth Games since 2014.
Sport
2 weeks ago

Women powered Team SA’s medal haul at the Commonwealth Games on Wednesday afternoon, scooping one bronze in mountain-biking and a second in lawn ...
Sport
2 weeks ago