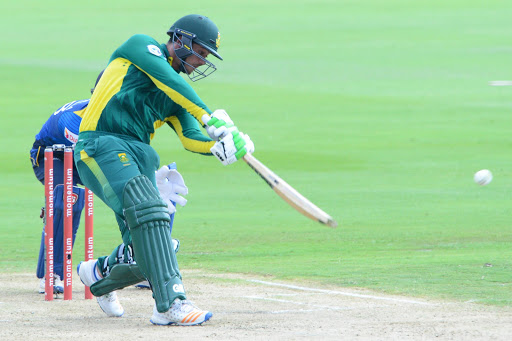 Quinton de Kock of the Proteas during the 5th ODI between South Africa and Sri Lanka at SuperSport Park on February 10, 2017 in Pretoria, South Africa.
Image: Lee Warren/Gallo Images

Quinton de Kock shook off almost two months of inactivity by hammering a century in South Africa’s one-day tour match against Sussex at Hove on Friday.

De Kock‚ who had been out of action since the last week of March with a finger injury‚ drilled 104 off 78 balls before retiring. He hit five fours and seven sixes.

That helped a weakened batting line-up – Hashim Amla was rested‚ AB de Villiers sat out with a respiratory infection‚ and Faf du Plessis is getting over a shoulder problem – reach 289/4 in the 32 overs the innings was reduced to by rain.

Sussex replied with 223/9‚ earning the visitors victory by 66 runs.

Wayne Parnell‚ who opened the batting with De Kock in Amla’s absence‚ clipped 61 off 42 balls.

The first-wicket stand swelled to 121 off 88 balls before Parnell was trapped in front by a blast from South Africa’s recent past – Kolpak kid Stiaan van Zyl.

JP Duminy then faced 46 deliveries for his 68‚ his first half-century at any level and in any format in 15 completed innings.

Kagiso Rabada bowled Chris Nash with the second ball of Sussex’s reply‚ and they were 87/4 after 12 overs with Van Zyl’s wicket amid the debris for 16.

No. 3 Harry Finch stood firm into the 26th over for his 62‚ the home side’s only half-century.

But South Africa won’t be happy that Rabada‚ Parnell‚ Dwaine Pretorius‚ Morne Morkel‚ Maharaj and Phehlukwayo all conceded more than a run a ball.

They will have a chance to make amends in another tour match‚ against Northamptonshire‚ on Sunday.

England and South Africa will meet in the first of three one-day internationals at Headingley in Leeds on Wednesday.