Parnell's goal - to 'stay in the moment' and come back strong 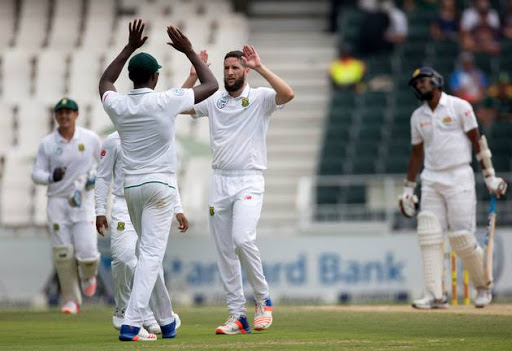 Birmingham - Parnell! To Rabada! Back to Parnell! Gooooaaaallll … ! What are a couple of cricketers to do on a drizzly day in Birmingham but take to Edgbaston’s indoor nets for a kickaround?

By then‚ Monday’s training session was over and Wayne Parnell and Kagiso Rabada had pressganged a tall‚ imposing Gianluigi Buffon of a security guard into service between the pair of orange plastic beacons that served as goalposts.

Goal after goal flew past the ’keeper‚ none of them of the quality of Mario Mandzukic’s spectacular strike for Juventus in the Champions League final against Real Madrid in Cardiff on Saturday. But none were too shabby‚ either.

Certainly‚ Rabada and Parnell looked like they were having more fun than in the first eight overs of Sri Lanka’s reply in their Champions Trophy match against South Africa at The Oval in London on Saturday.

Niroshan Dickwella - the short‚ sharp spike of a wicketkeeper-batsman - and Upul Tharanga - the lusty left-hander - took a liking to South Africa’s new-ball pair‚ tearing into them to score 68 runs off the first 49 deliveries they bowled in tandem.

But there was no panic. Instead‚ changes were rung and when Parnell and Rabada returned it was as if those first eight overs never existed.

Parnell‚ hit for 45 runs in his opening spell of five overs‚ kept the damage down to nine runs in the second half of his 10.

Rabada went for 28 in his first four. His remaining six cost only 18.

“I had 10 overs to complete and the first five didn’t go according to plan‚ but it’s all about staying in the moment and doing what’s required.”

What was required on Saturday was to ensure South Africa went to Birmingham with a win under their belts‚ which was achieved by 96 runs.

If the result had gone the other way they would have had to take on Pakistan at Edgbaston on Wednesday knowing that another loss would probably mean the end of their hopes of a place in the semi-finals.

Instead‚ Pakistan are the team under that pressure in the wake of shambling to defeat by 124 runs in their mega-match against India at Edgbaston on Sunday.

India didn’t lose a wicket until the 25th over‚ when they had put 136 on the board. Pakistan’s last seven wickets crashed for 50 runs.

So South Africa should be favourites on Wednesday.

But Parnell knew better than to think so‚ particularly with the famously volatile Pakistanis ranged against the South Africans.

“For us‚ over the next couple of days‚ it’s about focusing on what we do well instead of on what [Pakistan] did or didn’t do well; sticking to the South African brand of cricket‚” he said.

That said‚ Parnell himself has been known to play what could be called a Pakistani brand of cricket - fabulous in one match‚ frustrating in the next.

But with experience has come a level of consistency that has seen him entrusted with the new ball in 13 of the 18 one-day internationals he has played since becoming a regular member of the team a year ago.

“I bring a completely different skill set to this bowling unit‚ so for me it’s about trying to be the best version of myself‚” Parnell said.

“When I do that more often than not the results have been positive.”

His economy rate is slightly up at 5.63 but he has whittled his strike rate to 26.8.

And he’s managed to up his game despite a dressingroom cluttered with allrounders‚ four of them in this tournament alone.

“There’s always pressure from that perspective‚ but we’re at a stage where everyone’s comfortable with playing but also having to sit out at various times‚” Parnell said.

Times that are needed‚ no doubt‚ to work on their football skills.