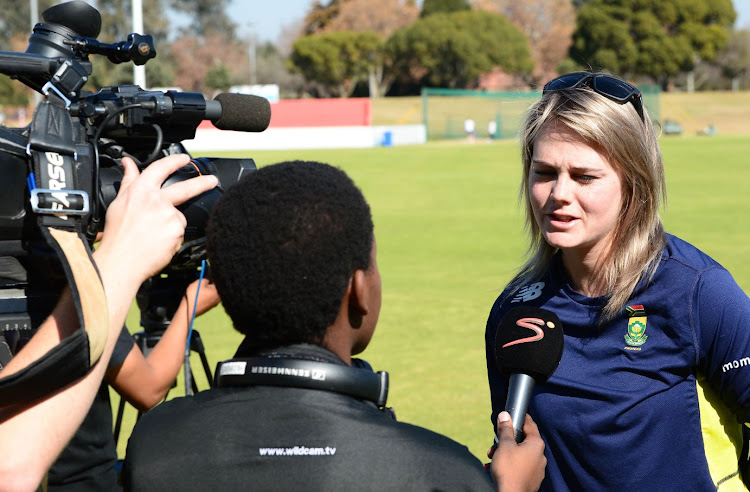 That cricket is a stupid game was proven again here on Sunday‚ when Dane van Niekerk grabbed the stunning figures of 4/0 to mark the only time in international cricket history‚ men’s or women’s‚ that a bowler has claimed that many wickets without conceding a single run.

That wasn’t the stupid bit.

Neither was the 48 West Indies were shot out for — their second-lowest total in one-day internationals — nor South Africa’s reply of 51 without loss‚ which sealed their third match without defeat in this women’s World Cup.

What didn’t make sense was that leg spinner Van Niekerk’s performance will not be recognised as the best of her career.

That distinction still belongs to the 5/17 she claimed against Pakistan in Doha in January 2014.

What did Van Niekerk think?

“Not to sound naive‚ [but] the ball’s not coming out great.

“I was just hoping to land it‚ to be honest.

“Because I bowled so many full tosses [on Saturday] I was just thinking‚ ‘Don’t bowl a full toss’.

Besides‚ it’s debatable whether Van Niekerk was even South Africa’s best bowler on the day.

She brought herself on to bowl in the 19th over‚ after West Indies had been reduced to 38/5.

Those wickets all crashed inside the first eight overs with only 16 runs scored to Shabnim Ismail and Marizanne Kapp.

“It’s surreal‚” Van Niekerk said of South Africa’s rout‚ which was complete when Laura Wolvaardt and Lizelle Lee knocked off the nominal target in 6.2 overs.

“I couldn’t script it any better.

“We had our plans coming into the game and‚ umm‚ they worked. To the T.”

How badly did the Windies bat?

“I looked at the dismissals and the way the ball moved‚ any batter in the world would probably struggle — ‘Shibby’ nipping them back‚ ‘Kappi’ swinging the ball miles‚” Van Niekerk said.

“We know when they are on song that is what happens.

“They’re going to trouble most of the best batters in the world‚ if not everyone.”

England‚ who have lost to India and beaten Pakistan‚ now to find a way past South Africa‚ who added Sunday’s triumph to a win over Pakistan and a washout against New Zealand‚ in Bristol on Wednesday.

Another success and the South Africans will be within touching distance of a place in the semi-finals.

Not that they were daring to think like that.

“The last thing we want to do is sit in the changeroom‚ have a drink and put our feet up‚” Van Niekerk said.

“We came here to win a World Cup. That’s our goal.”

As she spoke‚ most of the rest of her squad were practising out in the middle.