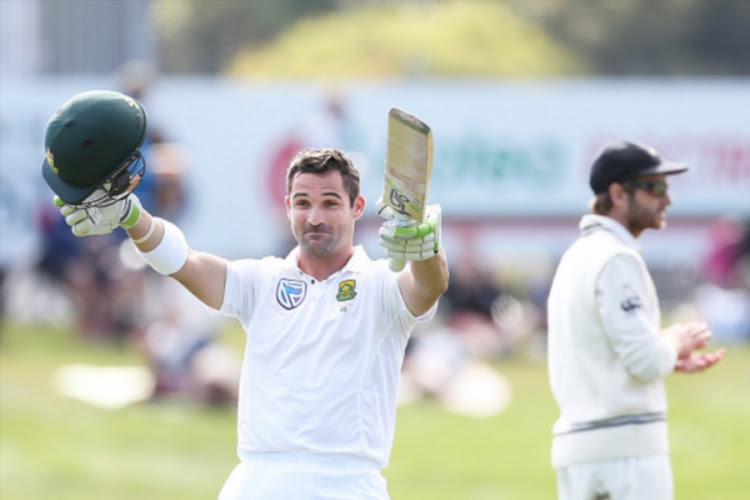 Dean Elgar of South Africa celebrates his century during day one of the First Test match between New Zealand and South Africa at University Oval on March 8, 2017 in Dunedin, New Zealand.
Image: Dianne Manson/Getty Images

At St Dominic's College in the small town of Welkom in the Free State‚ they remember a young Dean Elgar as an unassuming boy who loved his cricket.

As he went about his academic and sporting life at the school‚ little did they know that he would one day go on to become the 12th man to captain the Proteas since readmission.

That unassuming boy will do it at Lord's Cricket Ground of all places on Thursday.

Captain Faf du Plessis has been granted paternity leave following the birth of his first child‚ which has ruled him out of the first Test at the home of cricket‚ and the 30-year old Elgar has been handed the leadership responsibility.

Pierre Klopper‚ who is a cricket and hockey coach at St Dominic's College and has known Elgar since he was eight years old‚ said on Wednesday they are proud of what he has achieved in his career so far.

“He went through the doors here at the school and we have closely followed his career with pride as he was rising through the ranks until he made his debut for the Proteas in 2012‚" said Klopper‚ whose father Louis coached Elgar as a youngster.

"Playing for your national team is one thing but being made captain must be special and we are truly happy for him because he deserves the opportunity.”

Klopper said Elgar showed leadership qualities from a young age and he has captained most of the teams he's played in‚ from junior until club cricket level at Central University of Technology.

Should Vernon Philander need to call in a favour from his captain at Lord’s over the next few days‚ he should remind him of a certain game of ...
Sport
4 years ago

“I am not surprised at all that they have given him the opportunity to lead because he has those qualities in him.

"He is also a good player because if I remember very well he scored something like 32 hundreds as a junior which is extraordinary.

"He has showed his qualities as a player for the franchises that he played for and the national team.

“He has put our town and the school on the map and I am sure that there will be a lot of people from this area who will be following the match from Thursday to witness this special moment for one of our very own‚” added St Dominic's College headmaster Shane Gaffney.

Titans chief executive Jacques Faul‚ who recruited Elgar from the Knights in Bloemfontein to Pretoria in 2014‚ said they earmarked him for a leadership role at the franchise.

Something old‚ something new as SA await captain Elgar

Count Russell Domingo among those who see more than a little old-fashioned South African 'gees' (Afrikaans for spirit) in the way Dean Elgar plays ...
Sport
4 years ago

“When we brought him here (Pretoria)‚ we earmarked him for a leadership role within the set-up but things changed when he became a regular Proteas player which meant he was not going to be with us for most of the time.

"He is a gutsy player‚ leads by example‚ he is assertive and he has a big personality.

"I have no doubt in my mind that he can develop into a quality leader like Graeme Smith.

"We are happy and wish him all the best in the Test match‚” said Faul.