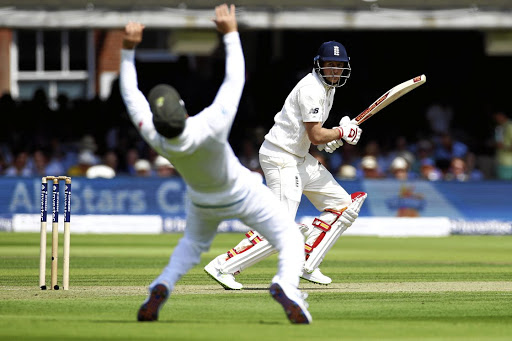 New England captain Joe Root rode his luck to make a battling unbeaten 184 and lift the hosts to a commanding 357 for five on the opening day of the first Test against South Africa at Lord's yesterday.

Root, dropped twice, and Ben Stokes (56) shared a fifth-wicket partnership of 114 to dig England out of a deep hole after they had stumbled to 82 for four at lunch having won the toss in excellent batting conditions.

The skipper reached his 12th Test century by sweeping spinner Keshav Maharaj for three, raising his bat to all corners of a sun-kissed home of cricket as a packed crowd rose to applaud him.

"I rode my luck but early on fell into place and I managed to capitalise on it," Root told Sky Sports.

"They bowled very well early on and I couldn't get my feet moving but credit to Stokesy and Moeen [Ali] for the way they played and, hopefully, we can come back tomorrow and post a really big score." Root emulated the feat of the last three England Test captains - Alastair Cook, Kevin Pietersen and Andrew Strauss - in scoring a hundred in his first game in charge.

South Africa fast bowler Vernon Philander dismissed openers Alastair Cook (three) and Keaton Jennings (eight), forcing Root to stride out to the middle with his team reeling at 17 for two.

The 26-year-old struggled to find his usual fluency against a disciplined South Africa pace attack and, on 16, he was dropped at gully off Kagiso Rabada shortly after offering a much more difficult chance to fine leg.

Stokes did advance down the wicket to lift Maharaj over long-on for six but the firebrand all-rounder also enjoyed a stroke of luck when he was bowled by a Morne Morkel no-ball.

Root reached 50 off 89 balls and slowly began to find his timing as the South African bowlers tired in the warm conditions.

Stokes got to his half-century shortly before tea but he fell soon after the interval, nicking a bouncer from Rabada through to Quinton de Kock.

After passing his century, Root lit up the ground with crisp punches through mid-wicket and square drives but he had another reprieve on 149 when he was stumped off a no-ball from Maharaj.

He struck 26 fours and one six, sharing an unbroken partnership of 167 with Ali, who finished on 61 not out, as runs flowed with England on top at the start of the four-Test series.

"It's a nice start, that's all it is, we have to kick on and the good sign for us moving forward is it looks like the surface is a bit dented so we will be in the game with our seamers," Root said.

South Africa were disappointed with their performance.

"It was a very good start but the way we came out after lunch was something we are not very proud of as a bowling unit," Morkel said.