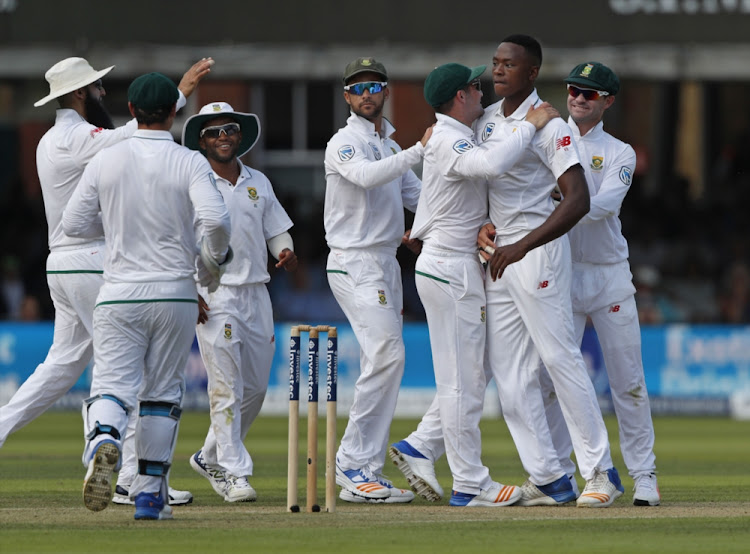 Just when it seemed as if England and South Africa were getting along far too fraternally in the first Test at Lord’s‚ normal service was restored in the shape of two short‚ sharp words from Kagiso Rabada.

“F-k off‚” the fast bowler barked at Ben Stokes after he had the hard-hitting allrounder caught behind in England’s first innings on Thursday.

That earned Rabada a fine of 15% of his match fee and a demerit point.

Fatally for the South African‚ his comment was picked up by the stump microphones and broadcast to an audience of millions.

As Rabada already had three demerit points from push coming to shove with Sri Lanka’s Niroshan Dickwella in a one-day international at Newlands in February‚ he was banned for the second Test at Trent Bridge in Nottingham on Friday.

BREAKING: Rabada banned for second Test against England after altercation with Stokes

South Africa will be a key player down for the second Test in Nottingham in the wake of Kagiso Rabada being banned after an altercation with Ben ...
Sport
4 years ago

There’s a relief. After the friendly fire between Hashim Amla and Moeen Ali a touch of needle was required.

Moeen reached 100 Test wickets when he had Dean Elgar caught at short leg.

He then trapped Amla in front with the first delivery he bowled to South Africa’s No. 3.

So‚ which of those wickets will the off-spinner hold most dear?

“He’s a very good friend of mine and I’ve never got him out in a Test before.”

Told Moeen was chuffed at dismissing him‚ Amla feigned a frown and said: “I’m not pleased‚ but it was good ball to get first up from a spinner: you’re not sure if it’s going to turn or not.”

That took him to 2000 runs and 100 wickets in his 38th test‚ or 10 matches faster than masterful West Indian allrounder Garfield Sobers.

What did he think of the comparison?

“In my garden I was better than Garfield Sobers‚ but I’m just pleased to have played so many Test matches‚” Moeen said.

What a lovely man. But people who prefer their cricketers less warm and fuzzy might want to tell him to eff off.