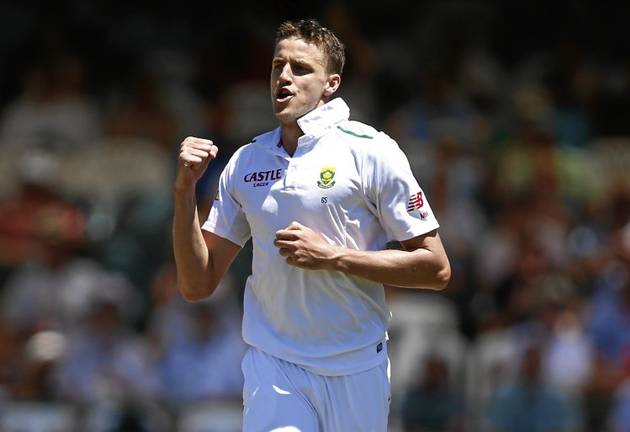 “Thirteen‚ yeah‚” Morne Morkel said with a wan smile on Wednesday after being reminded that no-one had taken as many wickets with no-balls in test cricket as he had.

“World record‚ thank you. Somebody has to hold it.”

Morkel’s unlucky 13th was Ben Stokes‚ who was 44 not out in the first test at Lord’s when he had the top of his leg stump nailed by a wicked inswinger that had snuck through the gap.

Replays showed that Morkel had not grounded any of his large left boot behind the bowling crease and Stokes was reprieved.

Stokes was dismissed a marginal 12 runs later‚ but Kagiso Rabada’s “f**k off” to the departing batsman led to him being banned for the second test in Nottingham on Friday.

Had Morkel not overstepped‚ Stokes — who has history with South Africans having told Temba Bavuma he was “absolute rubbish” — wouldn’t have been around for Rabada to swear at.

Not that Morkel’s mess-up was all South Africa got wrong.

Joe Root should have been caught on the boundary for five‚ but Aiden Markram made a hash of the chance.

Then Root was dropped in the gully by JP Duminy on 16.

Rabada was the aggrieved bowler both times: might there be empathy for his later outburst?

Keshav Maharaj‚ too‚ bowled a wicket-taking no-ball — this one had Root stumped for 149.

England’s captain went on to make 180 in his first test at the helm and play a major role in his team winning the match by 211 runs with a day to spare.

England were 159/5 in their second innings when Vernon Philander moved around the cover boundary to take a catch offered by Jonny Bairstow‚ a spidercam cable also moved — towards the ball‚ and enough to distract Philander‚ who spilled the chance.

From there‚ the home side added 74 runs from there before they were bowled out.

South Africa — chasing 331 to win — were bundled out for 119 in 36.4 overs to complete as comprehensive a thrashing as they have suffered in recent memory.

“We had two days in London to get over it‚” Morkel said.

“Once we got on the bus [on Tuesday] to travel to Nottingham it was important for us to leave that behind and look forward to Friday.

“It’s a quick turnaround — we’ve got two training sessions and it’s important for individuals to work out what you want to achieve in those two days.

“You don’t want to waste too much time and energy working on too many things. The best thing for us is to polish and do the basic things that we can control.”

“It’s not acceptable. It’s a controllable thing. Unfortunately I did bowl that no-ball and that’s the sort of thing you don’t want to give quality players like Joe Root and ‘Stokesy’.

“You’re going to get punished for that. The only thing I can do is keep on working on that; work on getting the foot behind the line.”

Did he want to beat himself up when his error was confirmed?

“It’s a rush of blood to the head‚ wanting to create something with the older‚ softer ball.

“It’s part of the game. They also bowled a couple of no-balls that might have taken a wicket. But I can’t make excuses.

“It’s not the first no-ball I’ve bowled in my life and it’s not going to end my career.”

Bowlers know how big their feet are as well as they know where the back edge of the crease is. So why were no-balls bowled at all?

“If I had the magic answer for that we wouldn’t be bowling no-balls‚” Morkel said. “We wanted to create something with the older‚ softer ball.

“Maybe I ran in too quickly and just over-strode.”

What would he change to solve the problem?

But he could get his foot in the right place. Every time.