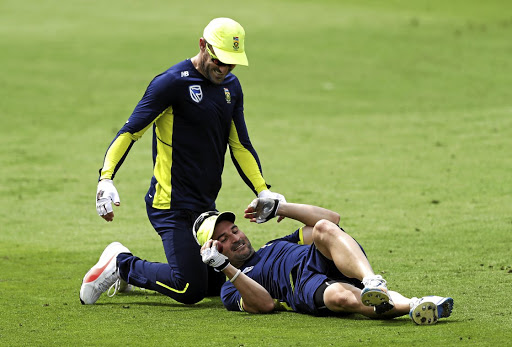 Not quite five minutes into Faf du Plessis's press conference at Trent Bridge yesterday, a man began hammering on a wall of the room.

High on the wall opposite a row of ancient bats, their faces stained and worn, and that had the names of their former owners, luminaries like Victor Trumper, Learie Constantine and, yes folks, WG Grace, cast in brass above them, rattled.

Du Plessis was distracted, but soon enough he returned his attention to the issues at hand.

The most pressing of them was why JP Duminy, who has played in 17 of South Africa's last 20 Tests and has not missed any of their previous dozen matches in the format, had been dropped for the second Test against England - which starts at Trent Bridge today.

"It was difficult as I know what he brings to the team, aside from his runs," Du Plessis said.

"But he would acknowledge that runs are what guarantee your place in the team.

"He was possibly given a longer run because you know what he does for the team. But his performance hasn't been consistent enough. They're not what we need from a No 4 batsman."

After his first three-Test innings - in Australia in December 2008 - he averaged a stupendous 108.5. Things could only go downhill from there.

Duminy has dwindled from a player who looked like reserving a spot for his bat on South Africa's wall of fame to someone who will now bang on the dressing room wall in the hopes of being let back in. At 33 and with his confidence in tatters, that seems unlikely.

Duminy will be replaced by Du Plessis himself, who missed the first Test at Lord's because he was on paternity leave.

How did Duminy take the news?

"JP served the team and took complete focus off himself," Du Plessis said.

"That's what this team is all about - how well you can help your teammates and not just look after your own game."

In the other confirmed change to South Africa's 11, Duanne Olivier comes in for Kagiso Rabada, who earned a ban for the second Test for accumulating four demerit points.

But there could be another alteration to South Africa's side.

"The decision is whether we want to go with seven batsmen or an extra allrounder," Du Plessis said.

The smart money is on Theunis de Bruyn making way for Chris Morris to give South Africa four frontline quicks.

As a plan for bouncing back at a ground that has tended to aid swing and seam bowlers it makes some kind of sense.

"There were a lot of times England found themselves under pressure [at Lord's]," Du Plessis said.

"The disappointing thing was how quickly they got out of it.

"It was almost as if when they threw a punch we sat back and let it happen and expected something to change."