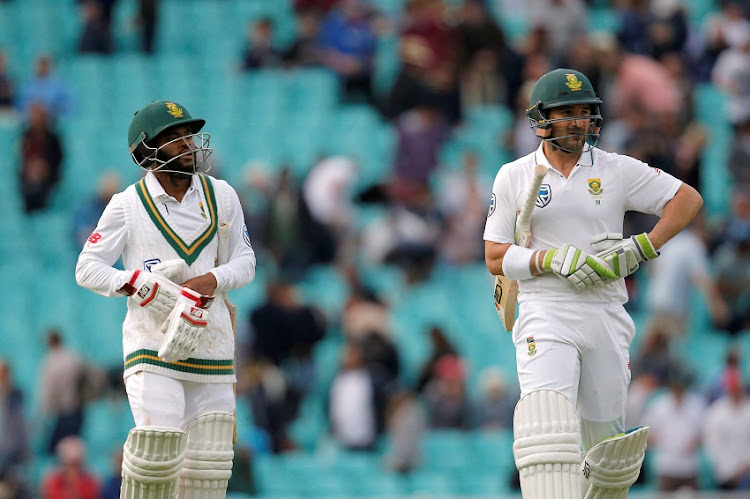 South Africa's Dean Elgar and Temba Bavuma walk off at the end of play.
Image: REUTERS

London — South Africa’s chances of winning their test series in England all but evaporated at The Oval on Sunday.

Stumps on the fourth day of the third test couldn’t come soon enough for the visitors, who teetered on 117/4 in search of 492 to win.

They looked out on their feet at the crease, from Heino Kuhn’s limp leap that saw him bowled, to Hashim Amla trying to leave and instead steering a catch to second slip, to Quinton de Kock being yorked off his boot, to Faf du Plessis being trapped in front playing no stroke — for the second time in the match.

But, for all that, there were a couple of hard bastards out there. Their names were Dean Elgar and Temba Bavuma, and they will be back on Monday.

Elgar, hit on the left hand when he fielded off his own bowling in England’s second innings and again when he batted, and dropped on nought, was 72 not out.

Bavuma, his back against the wall not for the first time and probably not the last in his fire-fighting career, faced 59 balls for his unbeaten 16.

The good news for South Africa is that the pitch has shown few signs of deterioration.

And that is stumps for day 4. A gutsy 72* from Elgar is keeping SA fighting. Bavuma too has done well on 15. One day to go #ENGvSA pic.twitter.com/0zxNpHsWLI

But the continued cloud cover is likely to mean the bowlers will enjoy more assistance from the conditions.

Should England complete what has been a superior performance in all departments with victory on Monday, they will hold a 2-1 lead.

That means South Africa will be reduced to trying to draw the rubber when hostilities resume in Manchester on Friday, and the portents for that happening are good.

Only once in their 413 tests before this match have South Africa chased down more than 400 to win, and only five times have they salvaged a draw after being set a target of 400 or more.

The converse is more often true: South Africa have lost 13 tests when they have gone in search of at least 400.

England resumed on 74/1, and Keaton Jennings was dismissed in the fifth over of the day when Kagiso Rabada surprised him with extra bounce.

The ball took the shoulder of the bat and flew to gully, where Chris Morris secured the catch.

Jennings, who was dropped on six on Saturday, scored 48 — his best effort in six test innings.

That was South Africa’s only success of the first session, and although they removed Tom Westley, Joe Root, Dawid Malan, Ben Stokes, Moeen Ali and Jonny Bairstow in the space of 24 overs before tea, there was little chance of the visitors regaining the advantage.

Instead, England’s surge towards an imposing target drove the dynamic of the first two sessions, the end of which brought their declaration on 313/8.

Debutant Westley scored 59, Root made 50 — the ninth consecutive test in which he has scored at least a half-century — and Bairstow’s innovative 63 off 58 balls featured ramp shots, angled bunts and reverse sweeps.

Jennings and Westley put on 62 for the second wicket, and Westley and Root added 78 for the third.