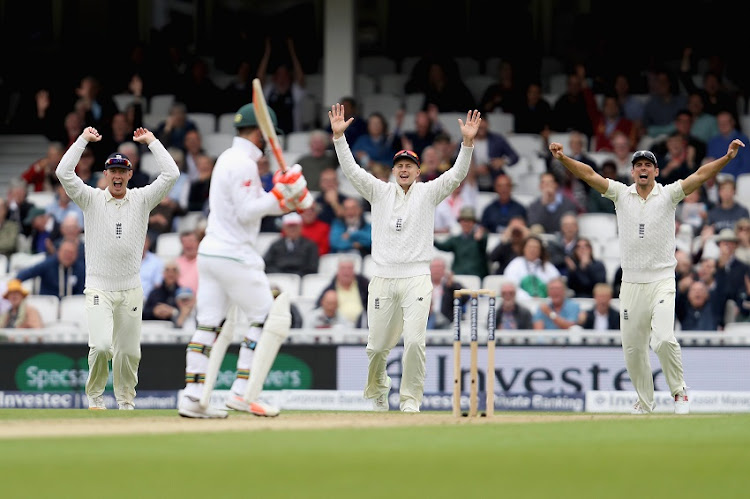 Keaton Jennings, Joe Root and Alastair Cook of England celebrate the wicket of Heino Kuhn of South Africa, trapped Ibw by Toby Roland-Jones, during Day Two of the 3rd Investec test match between England and South Africa at The Kia Oval on July 28, 2017 in London, England.
Image: Getty Images

London — Keaton Jennings’ wicket was South Africa’s sole reward as England continued to control the third test at The Oval on Sunday.

Debutant Tom Westley was 50 not out with Joe Root on 38 in a stand worth 61.England resumed on 74/1, and Jennings was dismissed in the fifth over of the day when Kagiso Rabada surprised him with extra bounce.

The ball took the shoulder of the bat and flew to gully, where Chris Morris secured the catch.

Jennings, who was dropped on six on Saturday, scored 48 — his best effort in six test innings.

Vernon Philander, who spent Friday night in hospital trying to recover from a viral infection, bowled a single spell of five overs in which he conceded 11 runs.

Philander, clearly still suffering the effects of illness, found the seam movement that makes him a rasping threat in seaming conditions.

But he struggled to settle on the fuller length that completes the equation.

Sunday dawned bright and clear but by lunch dark grey clouds had covered the ground, but no rain has been forecast.

If England win the match South Africa will have to win the fourth test in Manchester to claim a share of the series. - TimesLIVE