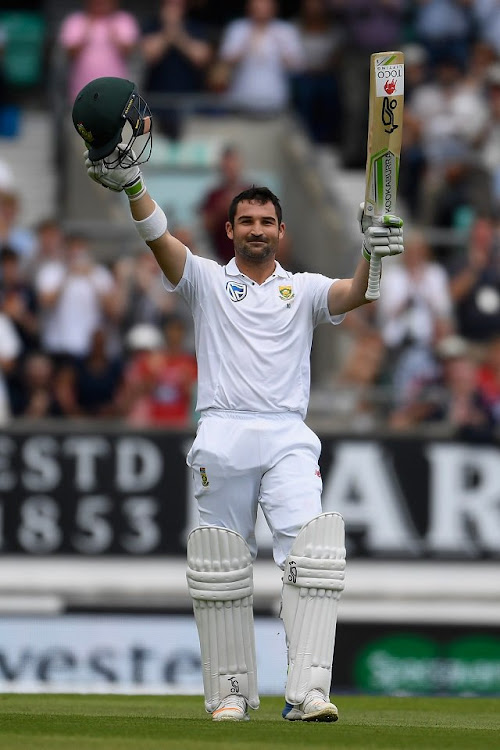 South Africans have been dismissed 102 times in the last six tests they have played‚ starting with the match against New Zealand in Dunedin in March.

But only twice have those South Africans been able to raise their bats to acknowledge the crowd’s appreciation for a century as they’ve walked off‚ and both times he has been Dean Elgar.

Elgar made 140 in the drawn match in Dunedin and 136 at The Oval‚ where England beat South Africa by 239 runs in the third test on Monday to take a 2-1 series lead.

Two out of 102? The gives South Africa a century-scoring percentage of 1.96% in the past five months.

For 53 minutes and 72 balls at The Oval on Monday‚ South Africa were in with a shout in the third test against England.
Sport
4 years ago

Might part of the problem be that South Africa have not played on a bona fide batting pitch in that time?

All the surfaces presented to them in New Zealand and in England have tilted towards bowlers of various shades — not unfairly‚ but clearly.

Swings and roundabouts‚ Russell Domingo said: “We don’t mind [more responsive surfaces] because it brings our bowlers into the game.

“We feel that we are a very good side when the ball is doing a bit‚ and we usually find a way to scrap a decent score and our bowlers are very effective.

“If you ask the batsmen‚ they would say they want to bat in ‘Potch’ and Kimberley every single weekend.

“The bowlers would like bowl at The Oval this past weekend or Wellington where it’s nipped around‚ or the Wanderers on a green wicket.

What’s a South African batsman to do? Use a bigger bat?

Maybe not‚ because soon there won’t be any pushing the corners of an envelope that has been swelling for years.

As of October‚ when new regulations come into effect‚ bats will be limited to a width of 108mm‚ a depth of 67mm and 40mm at their edges.

How big is that? Too big for David Warner to use the chunk of willow he favours for T20s‚ the Kaboom — which is 85mm deep and has edges of more than 50mm.

But Chris King‚ a bat-maker with Gray-Nicholls‚ manufacturers of the Kaboom‚ among many others‚ says size isn’t nearly everything.

“Everybody gets obsessed with the shape of the cricket bat‚ but the actual power comes from how well the piece of wood is pressed‚” King is quoted as saying in an article on betway.com.

“But that is an area of bat-making that most people don’t understand. They assume it’s just the size. If it was that easy‚ it would be a lot easier to make a good cricket bat.

Elgar ton in vain as Moeen seals victory with hattrick

Dean Elgar’s eighth century failed to save South Africa from defeat in the third test against England at The Oval on Monday.
Sport
4 years ago

“I often joke with people on social media that it’s like saying a Ferrari is fast because it's red. It completely undermines what the engine is.”

Much about cricket has and is changing‚ from bat size to send-offs for badly behaved players.

But the engine of a test team’s batting unit is still runs‚ and the most efficient and sure-fire way to gather them remains players spending long enough at the crease to score centuries.