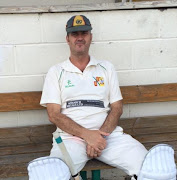 Image: Dion Taljard via Facebook A picture of former Border fast bowler Dion Taljard that he posted on his Facebook page in August 2015. Taljard was jailed for 18 years on Wednesday 14 September 2017 in Manchester, England, after being convicted on 19 counts of rape.

Former Border fast bowler Dion Taljard has been jailed for 18 years after being convicted on 19 counts of rape.Taljard‚ 47‚ who moved to Britain 17 years ago‚ was sentenced in Manchester on Wednesday.

He has protested his innocence and a campaign has been launched to try and clear his name.

According to evidence and testimony presented to Minshull Street Crown Court‚ Taljard attacked a woman‚ who has not been named‚ more than 150 times between 2002 and 2012 before she reported him to police in February 2015.

“The majority of the rapes happened on a Monday when he was at the darts and was drunk‚” prosecutor Nicholas Clarke told the court.

“He would say ‘I want to have sex with you’‚ ‘you will comply’. There were innumerable times when they had sex without her consent.”

In sentencing Taljard‚ judge Maurice Green told him: “You used violence towards this woman over and above even the rapes themselves.

“You manipulated her and sent her threatening text messages to her to get your own way.

“She was afraid of you. On one occasion she went missing and had to have a police helicopter to look for her.

“She described herself as at rock bottom and suicidal. She felt downgraded and intimidated on many‚ many occasions.

“This was because of what you had done to her.”

The news will shock many players who shared dressingrooms with Taljard during his professional career of more than 20 years in South Africa and‚ at club level‚ in Britain.

"What is clear is that you are particularly liked by many‚ many people‚” Green said.

“You were a professional sportsman and I have read nine testimonials from people who say you are honest and trustworthy person.”

Some of Taljard’s supporters have set up an online petition to fund his appeal.

“The whole case was planned and thought up by his ex-wife who didn’t allow him to see his three children for over two years‚ then continued on a mission to get him totally out of her life‚” according to “Justice for Dion”‚ which appears to be run by Taljard’s girlfriend‚ Jacqueline Costello.

“She played the system because she worked in the system and an innocent man will now never get the chance to see his ageing family in South Africa or his beautiful three daughters ever again.

“We need to get justice for this wonderful‚ caring‚ hardworking man who would do anything for anyone.”

A commenter on the site‚ Julie Rachman‚ wrote: “The truth must come out. I’ve known and was engaged to Dion in South Africa. He’s such a gentleman and would never hurt a soul.”

Taljard claimed‚ on his Facebook page‚ that he was innocent: “I have not done any of what I have been accused and found guilty of.”

One of the latter was claimed against Pakistan at Buffalo Park in East London in February 1998‚ when Taljard took a career-best 6/49 — a haul that featured a hattrick made up of the wickets of Yousuf Youhana‚ Azhar Mahmood and Saeed Anwar.