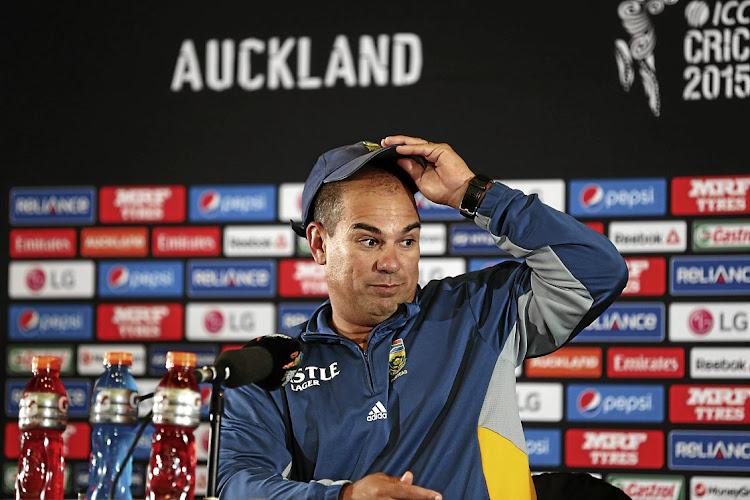 Russell Domingo has endorsed Ottis Gibson's appointment as Proteas coach and described his successor as a good human being who will go the extra mile for the sport in the country.

Domingo‚ who has taken over as the South Africa A coach after his four-year stint as Proteas coach‚ said Gibson has accumulated enough experience over the years.

“He has been around the world where he has coached under different circumstances and he knows the set-up here in South Africa because he played here in the past‚" Domingo said.

"I congratulated him in the UK when the story first broke out and I am really pleased for him‚” he said on Wednesday.

Domingo is peparing the South Africa Invitation XI to play a three-day tour match against Bangladesh on Thursday in Benoni and he said the new SA coach would be good for the sport.

“He is a fantastic guy and I think he will do a wonderful job because he is experienced.

"He is a really good human being.

"I had dinner with him in the UK and he is a top guy.”

Asked what advice he would give Gibson as he prepares for his first Test as South Africa coach against Bangladesh in Potchefstroom on September 28‚ Domingo said the Barbadian does not need any pointers.

"He must come with his own ideas.

"He must find out for himself and make his own decisions.

"He must not come with any preconceived ideas but I am sure he will do whatever is best for South African cricket.

"He is faced with the same challenges that I faced in England with Chris Morris‚ Vernon Philander‚ Dale Steyn and AB de Villiers but once all those players are back we should be firing on all cylinders."

Domingo said he looks back at his tenure as Proteas coach with a certain level of pride because he left the team in a good space and with a good win ratio over the past two years.

“I left our Test team on number two on the Test rankings and the ODI team number one in the world.

"There has been some tough periods but I can gladly walk away and say that I have done fairly well because our win percentage over the past two years has been fantastic.”

As the coach of the SA A‚ Domingo says he has a lot of work ahead to fill the holes in the senior national team with exciting young talent.

“I have a lot of work to do with SA A team and the national academy.

"There are some holes in the national side that needs to be filled.

"I think I have a big role to play in trying to get those younger players that are in the system to fill the gaps.

"I would like to find a top order batsman who can bowl overs to the effect of Ben Stokes or Jacques Kallis.” - TimesLIVE