LUNCH | Aiden Markram impresses on his Test debut in Potchefstroom 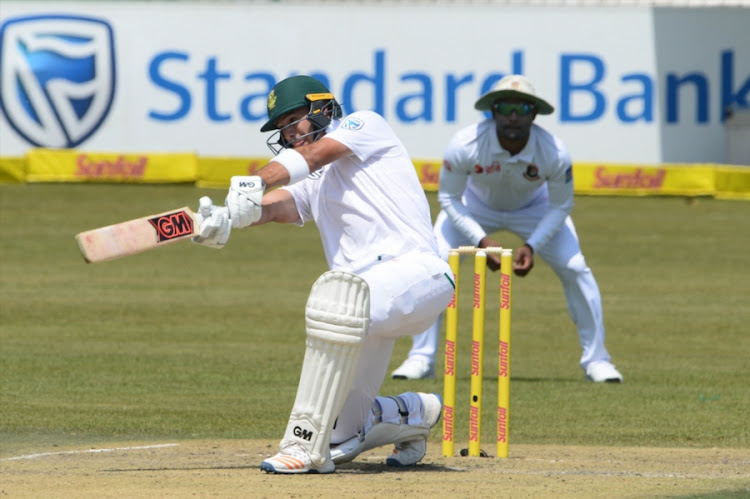 Aiden Markram of the Proteas during day 1 of the 1st Sunfoil Test match between South Africa and Bangladesh at Senwes Park on September 28, 2017 in Potchefstroom, South Africa.
Image: Lee Warren/Gallo Images

Aiden Markram started his Test career impressively by scoring a patient but elegant 43 off 69 balls at lunch in the first Test against Bangladesh in Potchefstroom on Thursday morning.

South Africa ended the first session on 99/0 after 27 overs and it appears that Bangladesh are in for a torrid afternoon if Dean Elgar and Markram continue to pile on the runs in the remaining sessions of the day.

Supported by the experienced Elgar‚ who scored his ninth Test half century to go with his eight centuries‚ Markram impressed with some well-timed shots through the gaps and his calmness.

The two went to lunch having put together a partnership of 99 off 162 balls‚ despite losing the toss.

They batted first and this turned out to be a blessing in disguise in good batting conditions.

However‚ Markram was lucky not to be caught in the 19th over when one of his few unsure shots did not carry all the way to diving Mustafizur Rahman at backward point from the bowling of Taskin Ahmed.

He scored his first run in Test cricket from the bowling of Rahman‚ which was a forward shot to the cover area.

This helped him to calm the nerves after three overs.

In the sixth over‚ Markram registered his first boundary at this level with an elegant half-volley through the covers from Rahman which was met with applause from the small crowd.