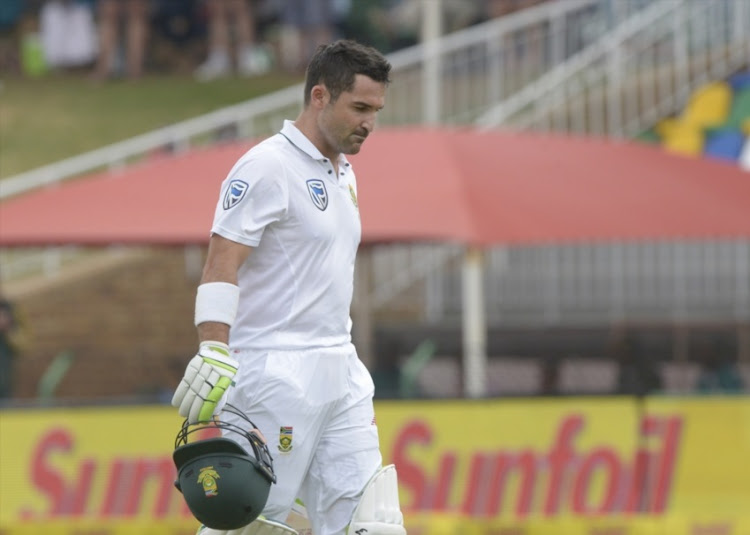 Dean Elgar of South Africa leaves the field after scoring 199 runs, his highest, during day 2 of the 1st Sunfoil Test match between South Africa and Bangladesh at Senwes Park on September 29, 2017 in Potchefstroom.
Image: GALLO IMAGES

Elgar’s top edge was caught at mid-wicket one run shy of his maiden double ton and  dropped Bangladesh captain Mushfiqur Rahim twice on 6 and 15  at slip after taking responsibilities from Hashim Amla.

Elgar revealed after day two’s play that he was fielding at slip because Amla does not want to stand there anymore.

The SA batsman promised a better performance in the remaining days of the Test match.

"It is something that you have to get through‚ deal with and I look at the positives.

"I still have another opportunity to get a Test double hundred at a later stage which is fine with me.

"It was quite an anticlimactic day to say the least."

Asked to describe the manner in which he was bowled agonisingly short of a significant milestone of 200‚ Elgar said it was an average moment of cricket.

“It was just an average moment of cricket‚ an amateur moment to be honest.

"But I do think the nature of the wicket is going to somewhat deteriorate especially for the seamers.

"There is just not a lot of pace in the wicket where our spinners are going to get into the game more.”

Looking ahead of day three‚ which will start with Bangladesh on 127/3 and trailing the Proteas by 369 runs‚ Elgar said spinner Keshav Maharaj is likely to play an important role because of the deteriorating pitch.

“Keshav has been vital for us in every test match that he has played and Saturday is going to be a big one for him‚" Elgar said.

"The wicket offers him what he does and he spins the ball.

"We are fortunate now that we have a guy who spins the ball hard and definitely uses the facilities very sell.

"The odd one will turn or skid a little bit."

South Africa held a considerable lead of 369 runs at the close of play on day two of the first Test having rattled Bangladesh with three wickets ...
Sport
4 years ago

Was Haroon Lorgat the victim of CSA power struggle?

Haroon Lorgat has been cast as a victim of a power struggle within Cricket South Africa (CSA)‚ whose corridors are said to be fraught with fear‚ ...
Sport
4 years ago

Dean Elgar suffered personal misfortune after lunch on day two of the first Test against Bangladesh as he became 10th batsman and the first South ...
Sport
4 years ago