Traditionalists will see red‚ but pink ball is here to stay 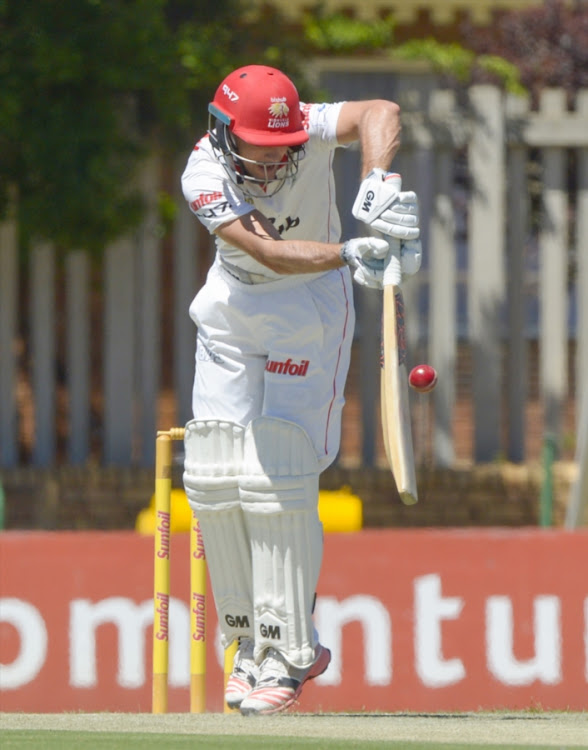 Stephen Cook of the Lions during day 1 of the Sunfoil 4-Day Series match between bizhub Highveld Lions and VKB Knights at Senwes Park on October 16, 2017 in Potchefstroom, South Africa.
Image: Sydney Seshibedi/Gallo Images

With Zimbabwe set to join the day/night Test club against South Africa at St George’s Park on December 26‚ how long before pink balls outnumber red in proper cricket?

“It’s good that we’re playing [a day/night Test in South Africa] because we’re staying up with the curve and being proactive rather than falling behind‚” the opening batsman said on Wednesday.

“But it should be an every-now-and-then Test match — one in the summer. Then it can keep being special and different.

“If you start playing too much of it I think it will lose its sparkle quickly.”

That’s not to say Cook isn’t a fan of the pink ball. Why wouldn’t he be having seen and hit it well enough to score 104 in the third Test against Australia at Adelaide Oval in November last year?

“These days not many people can sit through a whole day of Test cricket‚” Cook said.

“So if people can come after work and watch one or two sessions maybe we can grow the popularity.”

Australia and New Zealand contested the first day/night Test in Adelaide in November 2015‚ and the Ashes test at the same venue that ended on Wednesday was the seventh.

None have been drawn‚ two have been decided inside three days‚ and four have gone to five days — three times in the last four day/nighters.

That progression wouldn’t surprise Cook‚ who said: “We went on an A tour [to Australia in August 2016‚ before the senior tour] and I found it very difficult to pick up the ball.”

In four innings facing the pink ball on South Africa A’s visit‚ Cook eked out 58 runs in four innings. Two ended in ducks‚ the others in scored of five and 53.

“After that they changed the colour of the stitching [from green to black] and a couple of other details‚” he said.

“By the time the Test squad got to Australia we were playing with a ball that behaved more like the traditional one.

“I think‚ because of the research and development‚ the ball’s quality is getting better and better.

“It doesn’t get as soft and you can see it better. Yes‚ it swings. But not all the time like it did at first.

“At first I was very sceptical. But the more [pink-ball cricket] gets played and the more the same sort of results happen and no type of bowler or type of batsman has an unfair advantage‚ and if you’re good with the red ball you’ll probably be good with the pink ball‚ the more people are going to be open to it.

“The scenario of the new ball under the lights does affect the tactics. But it’s similar to bowling in the morning at Newlands‚ when it’s still damp and there’s cloud around. It’s just at a different time of the day.

“There are subtle differences but it’s not a completely different format of the game. But the fact that the ball has come a long way has made a big difference.

“When it had a green seam‚ if you bowled any sort of decent leg spin it was next to impossible to pick up which way the ball was turning.”

Dilip Jajodia‚ who owns the company that produces balls used in major matches in England‚ said in a video interview with the website of London’s Evening Standard newspaper in August that the concept was not the finished article.

“There’s not enough [pink-ball] cricket being played around the world to make large quantities to be able to fine tune it‚” Jajodia said. “We’re still sort of developing on the hoof.”

Pink and orange‚ he said‚ were good options.

“We have tried yellow. When the ball goes up in the air‚ under lights‚ it’s very good.

“But when the … pitch is a grey‚ slightly beige colour‚ the yellow doesn’t stand out enough.”

Traditionalists who brand Jajodia as Frankenstein bent on creating monsters in many colours‚ they should know that a smartly knotted tie hung around his neck as he spoke.

It was a Marylebone Cricket Club member’s tie.

A defiant Joe Root insisted the Ashes series was by no means over despite England falling to a 120-run defeat in the second test at Adelaide Oval on ...
Sport
4 years ago

Anderson, Root give England a sniff in Adelaide

England were 178 runs from a stunning comeback victory in the second Ashes test after James Anderson grabbed five wickets and Joe Root steered the ...
Sport
4 years ago

Dale Steyn will be back in whites for the first time in more than a year when a SA Invitation XI play Zimbabwe in a tour match in Paarl this month.
Sport
4 years ago