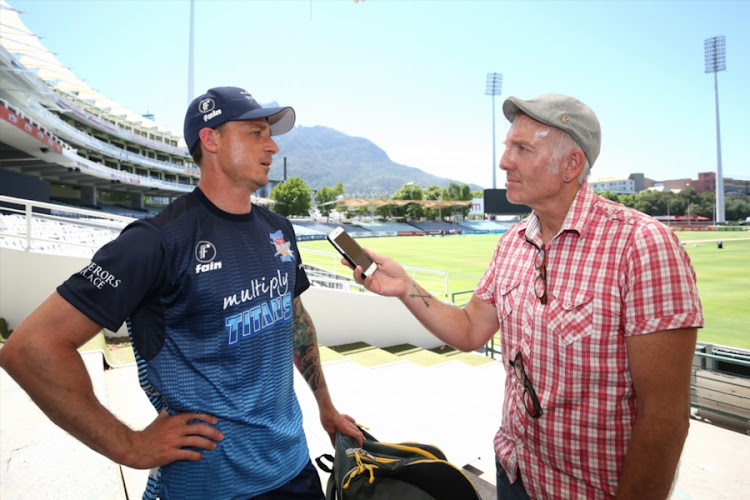 A familiar voice bubbled‚ burbled and just plain boomed out of the wide open windows of the bustling players’ enclosure at an otherwise all but empty Newlands on Thursday.

The sound was of enthusiasm itself‚ and it skipped across the outfield like a stone across a pond and might have leapt Table Mountain itself.

Whoever that man was‚ he was as happy as the sun was high in the blindingly blue early afternoon sky.

That man was Dale Steyn.

“I kind of forgot what it was like to be with the guys‚” Steyn told TimesLIVE as he stood in a welcome pool of shade after clattering down the stairs in his spikes‚ kitbag on his back‚ sunblock everywhere.

“Last night we had a Titans team thing.

"Everyone was at ‘Forries’ [Foresters Arms‚ a beloved old school Newlands pub] and then we had dinner and went out and had one or two drinks and enjoyed each other’s company.

“Which was different‚ because for a year I’ve been sitting around watching guys on TV.

“You still feel like you’re part of a team but I’m sitting on my couch sending messages saying well done or hard luck.

“Now I’m here and we’re talking‚ sometimes about the guys’ personal lives‚ and you don’t get that when you’re on the couch in the evening watching cricket.

“And the next morning I go train by myself …”

Steyn is selling himself short.

Far from “sitting on my couch” he’s been battling his way back from the broken shoulder and ripped muscles he suffered while bowling against Australia at the WACA in Perth last November.

“I can train as much as possible but gametime is going to be the most important thing for me right now.

“But you can only play one game at a time and T20 is the best I can do right now.”

Steyn will pull on his whites for the first time since that awful day in Perth in Paarl on December 20‚ when he will be part of a South Africa Invitation XI squad for a three-day match against Zimbabwe.

“Hopefully‚ if I get through there fine‚ I can’t see any reason why I can’t play the test match — obviously selection permitting. But my body will be fine.”

But Steyn‚ juicily human as he is‚ sounded a touch torn between setting playing in that match as his goal and helping the Titans‚ the dominant T20 franchise‚ shoot for the stars.

“Coming into this I thought I’d play a couple of games and prepare myself to play for the Proteas‚” he said. “But now I’m in it.

“There’s a semi-final coming up [next Wednesday or Thursday] and I want to play.

"Whether I can play is another story with the three-day game coming up. And then there could be a final [next Saturday].

“But I’m genuinely in it to hopefully go through and win it. I feel like I want to be put under pressure‚ and I feel like the Cobras are the one line-up who can do that from a batting perspective.

“But the Knights seem like they’re up for the fight — they were keen to come at us and to come at me.”

Again‚ Steyn was being hard on himself. In his first two overs at St George’s Park on Sunday he trapped the Knights’ Rudi Second in front with his first delivery and had Keegan Petersen caught behind with his third for spell figures of 2/4.

Steyn strayed once down leg and once outside off in the 12th over‚ and Ryan McLaren took advantage both times to hit the only boundaries in a return of 4-0-20-2.

But‚ when you’re as brimming with the joy of being alive and well as the newly repaired Steyn plainly is‚ all you can see is the next step forward.

And with that he took that step: out of the shade and into the blazing sun to join his teammates for what promised to be a brutal training session ahead of the Titans’ encounter with the Cobras on Friday.

The sunlight lit his face as he skipped over the boundary‚ but not as brightly as his smile.

Confident Australia move on to Perth with urn on their minds

Australia captain Steve Smith thinks England will struggle to get back into the Ashes series after losing in Adelaide to trail 2-0 heading into next ...
Sport
4 years ago

Traditionalists will see red‚ but pink ball is here to stay

With Zimbabwe set to join the day/night Test club against South Africa at St George’s Park on December 26‚ how long before pink balls outnumber red ...
Sport
4 years ago

A defiant Joe Root insisted the Ashes series was by no means over despite England falling to a 120-run defeat in the second test at Adelaide Oval on ...
Sport
4 years ago