Steyn overjoyed to be back in the crease 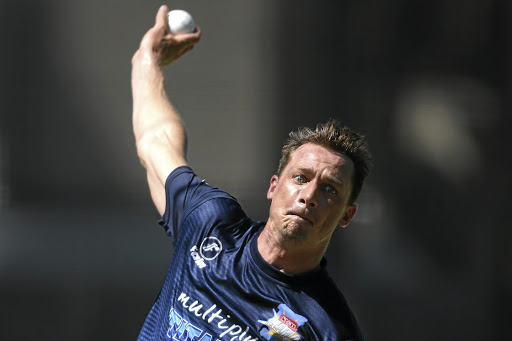 BACK FROM INJURYDale Steyn during a Titans training session at PPC Newlands on Thursday Picture: Shaun Roy/Gallo Images

A familiar voice bubbled, burbled and just plain boomed out of the wide-open windows of the bustling players' enclosure at an otherwise all but empty Newlands on Thursday.

Whoever that man was, he was as happy as the sun was high in the afternoon sky.

That man was Dale Steyn.

"I kind of forgot what it was like to be with the guys," Steyn told The Times as he stood in a welcome pool of shade after clattering down the stairs in his spikes, sunblock everywhere.

"Last night we had a Titans team thing.

"Everyone was at 'Forries' [Foresters Arms, a Newlands pub] and then we had dinner ... and enjoyed each other's company.

"Which was different, because for a year I've been sitting around watching guys on TV.

"You still feel like you're part of a team but I'm sitting in my couch sending messages saying 'well done' or 'hard luck'.

"And the next morning I go train by myself."

Steyn is selling himself short. Far from sitting in his couch he's been battling the broken shoulder and ripped muscles he suffered while bowling against Australia last November.

"But you can only play one game at a time and T20 is the best I can do right now."

Steyn will pull on his whites in Paarl on December 20, when he will be part of a South Africa Invitation XI squad for a three-day match against Zimbabwe.

"Hopefully, if I get through there fine, I can't see any reason why I can't play the Test match - obviously selection permitting."

But Steyn, juicily human as he is, sounded a touch torn between setting playing in that match as his goal and helping the Titans, the dominant T20 franchise, shoot for the stars.

"There's a semifinal coming up [next Wednesday or Thursday] and I want to play.

"Whether I can play is another story with the three-day game coming up. And then there could be a final [next Saturday]."

But, when you're as brimming with the joy of being alive as Steyn plainly is, all you can see is the next step forward.

And with that he took that step: to join his teammates for what promised to be a brutal training session ahead of the Titans' encounter with the Cobras on Friday.