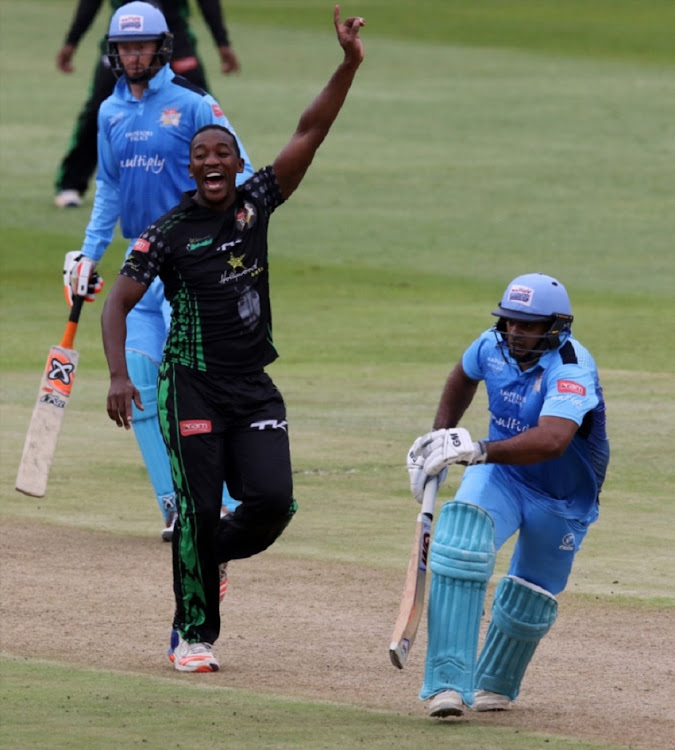 Mthokozisi Shezi gets a wicket during the RAM SLAM T20 Challenge match between Hollywoodbets Dolphins and Multiply Titans at Sahara Stadium Kingsmead on December 10, 2017 in Durban.
Image: Anesh Debiky/Gallo Images

Durban’s dreaded rain finally left the Dolphins alone on Sunday, and they showed what they could do when they were able to keep their powder dry by nailing down a T20 semi-final berth.

They did so by beating the Titans by 89 runs — the KwaZulu-Natalians’ biggest win in the history of the competition — to earn the right to play the Cobras at Kingsmead on Thursday.

Sunday’s game was the only one of the five T20s at the ground this season in which rain has not had the final say.

The Titans, long since assured of a home semi, fielded a severely depleted side and paid the price with seven wickets falling to spinners.

But the Dolphins will be forgiven: their attention is squarely focused on their semi against the Warriors in Centurion on Wednesday.

The Eastern Capers reached the final four by completing a hattrick of victories with an 18-run win over the Cobras in East London.

Morne van Wyk hammered 10 fours in his scored 67, his third consecutive half-century, to power the Dolphins to 168/7.

The Titans were shot out for 79 in reply with Prenelan Subrayen, Imran Tahir and Keshav Maharaj taking two wickets each.

Hashim Amla’s 39 was the best effort in a fangless Cobras innings.

The Titans have lost only two of their 10 games, but they have suffered those losses in their last two matches.

Has their momentum ground to a halt, or will they be able to flick the switch back to on now that it matters?

We’ll soon find out — the winners of this week’s semi-finals will clash in the final on Saturday.