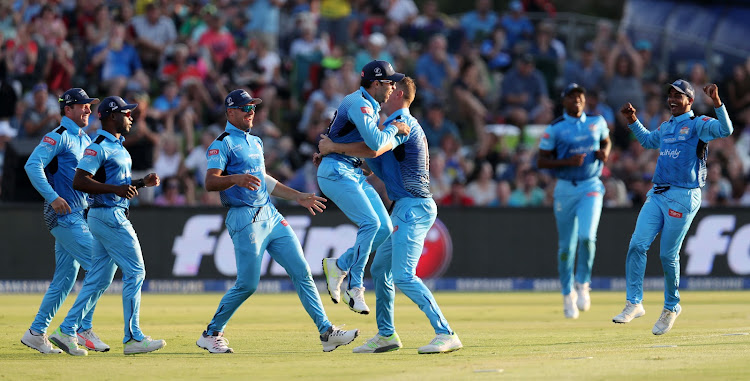 Farhaan Behardien of the Titans celebrates with teammates after catching out Morne van Wyk of the Dolphins during the 2017 T20 Ram Slam Final match between Multiply Titans and Hollywoodbets Dolphins at SuperSport Park, Centurion South Africa on 16 December 2017.
Image: Muzi Ntombela/BackpagePix

There was very little Ram and even less Slam as the Titans coasted to their fifth domestic T20 title here on Saturday night.

They lived up to their champion status by crushing the Dolphins by seven wickets in an utterly one sided final.

Given their performance you had to wonder how the Dolphins got to this advanced stage of the competition, but to be fair the Titans have throughout this campaign been in a class well elevated above the rest.

The visitors really were like a fish out of water as their innings, after a breezy opening over that yielded 11 runs, spluttered to an almost predictably limp conclusion. Their 100 all out in 18.3 overs was the lowest ever score in a final.

The Dolphins buckled under the pressure of a star studded Titans line-up from the outset.

No width was offered and when the ball was dug in it served to keep the Dolphins on the backfoot in every sense.

Lungi Ngidi two for 15 off his four overs and Chris Morris four for 13 ripped the heart out of the visitors' challenge.

The Dolphins simply could not get going and following a tight first over by Ngidi, Morne van Wyk skied Morris to point running backwards.

The shot selection was the product of Ngidi's preceding tight over from the Hennops River End, but Morris too gave away little.

It left Vaughn van Jaarsveld with little option but to follow the path of his fellow opener.

At 28 for three after five and a half overs the Dolphins already had to recalibrate the expectations they might have had of posting a commanding total.

Things didn't get much better when the quicks weren't around. Although the competition's leading wicket taker failed to add to his tally last night the visitors found Tabraiz Shamsi's deliveries for most part inscrutable.

The Dolphins' shot selection came under duress and not as a result of their full command of the moment.

The Titans by contrast came out hard, but they were aided by some errant new ball bowling. Quinton de Kock dared and dashed in compiling 39 but by then the Titans were well on their way. His departure brought AB de Villiers, to rapturous applause, to the crease .

He smashed 27 off 13 balls but by then the Ram Slam T20 title was just about signed, sealed and delivered.

Smith, Marsh put England to the sword at Waca

An epic and unbeaten 301-run stand by home captain Steve Smith and Mitchell Marsh struck a heavy blow against England’s hopes of keeping the Ashes ...
Sport
4 years ago

Jonny Bairstow kept his head with a fine century for England but Steve Smith showed a captain's poise to guide Australia to 203 for three at the ...
Sport
4 years ago

Is the fix in at Ashes Test? ICC investigates

The ICC was taking allegations in a British newspaper about attempts to organise spot-fixing during the third Ashes Test "extremely seriously" but ...
Sport
4 years ago