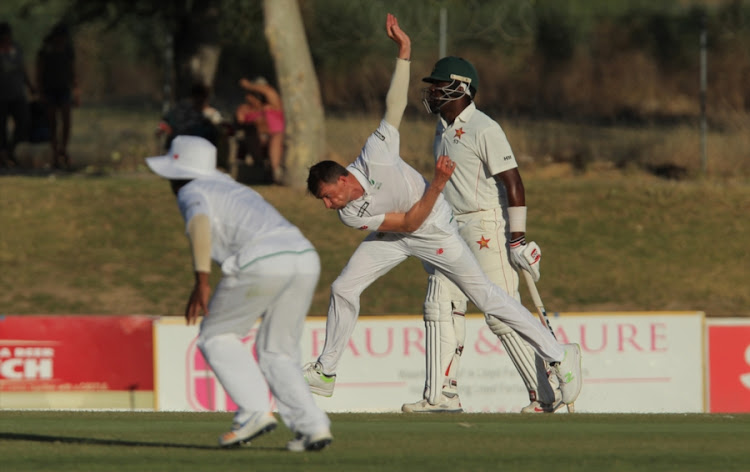 Proteas coach Ottis Gibson is relishing the opportunity to pick his aces from a full deck ahead of the historic day-night pink ball cricket test against Zimbabwe at St George’s Park‚ Port Elizabeth starting on Tuesday.

A Proteas team at full strength has been a rare commodity in recent years and heading into this summer Gibson has the luxury of being able to choose from the best the country has to offer.

Coming back into the mix for the Zimbabwe four-day test are the formidable trio of batsmen Dale Steyn‚ Vernon Philander, Morne Morkel and premier batsman AB de Villiers.

Gibson‚ in his second assignment after seeing off Bangladesh in all formats with ease in September and October‚ acknowledged on Friday that selection will be a nightmare but not the kind you wake up sweating from.

“It’s a good nightmare you know. Some nightmares you want to wake up quickly‚” he said with a smile as the Proteas readied for Zimbabwe.

“This one is a good nightmare because you’re bringing back such quality players and it’s going to be an interesting selection.

“If we get it right and you look at the strength of the team you can put out on the park then that’s the pleasing thing.

"It’s good to have all those guys back. AB’s not played [tests] for a couple of years‚ Vernon been injured and Morne been injured as well.

"So he’s also back in the frame too. Again‚ getting the right blend of a team is going to be a challenge but it’s a great challenge and I guess it’s one we all looking forward to.”

The prospect of an attack with Kagiso Rabada‚ Steyn‚ Morkel and Philander steaming in at full tilt will have South African cricket fans salivating.

But Gibson was not giving much away saying management would assess Steyn once he arrived in Port Elizabeth from Paarl where he came through a dozen overs with success against Zimbabwe for an SA Invitation side this week.

But one could tell by the way the former West Indian quick spoke about the Phalaborwa Express that he is itching to let Steyn loose against Zimbabwe.

“From a world perspective‚ he’s been a champion bowler for a long time. Probably along with Jimmy Anderson the best of the modern generation in terms of wickets taken and games played.

"The way he’s led South Africa’s attack for a number of years has been great. He’s had a lot of injuries recently but it’s good to see him back on the field and it’s good to have him back in the squad.”

“I saw he bowled 12 overs in two spells in Paarl. When you’ve had such a long lay-off and an injury you just have to wait and see how he pulls up here.

"Hopefully‚ he pulls up well‚ he’s on his way here now from that game and we’ll just see how he goes‚ not just into this game‚ but into the summer.”

One can understand why Gibson is wary of rushing Steyn into the side without assessing for himself exactly where he is fitness-wise.

After Zimbabwe‚ there are far greater tests awaiting in the form of India and Australia and he would love Steyn to play a major role in those rubbers.

The 34-year-old Steyn needs just five wickets to overtake Shaun Pollock's South African record of 421 test wickets but he has not played a test for over a year.

South African supporters will be hoping he passes that mark in Port Elizabeth‚ the city where he made his test debut 13 years ago.

AB de Villiers opens up on life and cricket

He gets nervous even when batting in back-yard cricket and he reveals which bowler troubled him the most.
Sport
4 years ago

Ideally, 2017 should have been a crowning year for former Cricket South Africa (CSA) chief executive Haroon Lorgat.
Sport
4 years ago

Why ignore Zimbabwe atrocities for cricket?

Almost an hour before the first garishly pink ball was bowled under Paarl's baking afternoon sun on Wednesday, Makhaya Ntini sent a plate of garlic ...
Sport
4 years ago

SA and Zimbabwe venture into unknown territory
Sport
4 years ago