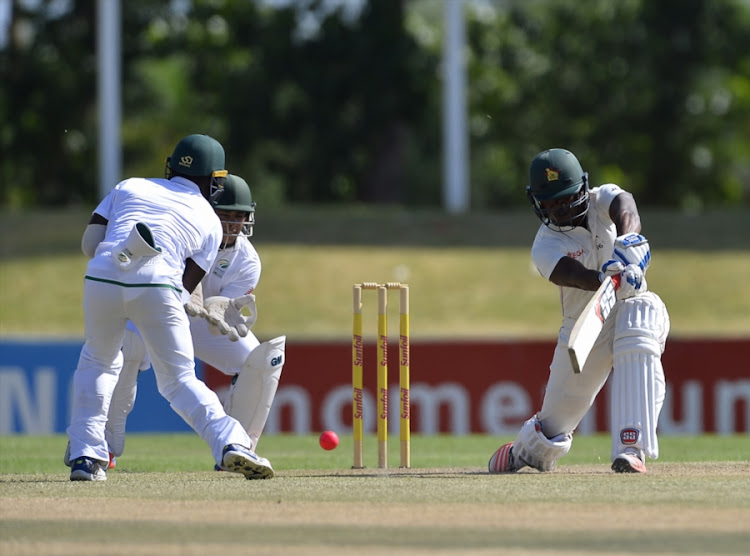 It doesn’t say much for Zimbabwe’s prospects in the test at St George’s Park on Tuesday that they will go to Port Elizabeth freshly beaten by a bunch of inexperienced youngsters.

Eight members of the South Africa Invitation XI’s squad of 14 who beat the visitors by five wickets in their tour match in Paarl on Friday are younger than 25 and only two are older than 30.

Four of them have yet to play a franchise match, another four — Dominic Hendricks, Temba Bavuma, Shaun von Berg and Dale Steyn — between them hold almost 100 more first-class caps than the rest of the squad, and Bavuma and Steyn left for PE to join the test squad after two of the three days.

There is mitigation in the fact that the Paarl game was the first time the Zimbabweans had encountered the pink ball in match conditions, and that they rarely play under lights.

But that won’t mean much when they have to find a way to survive, nevermind prosper, in the four-day, day/night test at St George’s Park.

They resumed their second innings in Paarl on Friday with a lead of 29 runs and with three wickets standing.

An eighth-wicket stand of 97 between Ryan Burl and Chamu Chibhabha bumped the target up to 153.

The home side made their chase more complicated than it should have been, shambling to 73/3 before Ricardo Vasconcelos took them home with an unbeaten 57 that he clipped off 55 balls with eight fours and two sixes.

The Zimbabweans will latch onto the positive that their captain, Graeme Cremer, took 4/44 to complete a match haul of 8/111.

The first four wickets in the Invitation XI’s second innings belonged to him, a raid that started when he trapped Isaac Dikgale in front in the 13th over.

That suggests Cremer will be a threat earlier than is usual for a spinner even at St George’s Park, which is often charitable to slow bowlers.

He could make a decent argument for being recognised as the holder of the unofficial title of the best leg spinner currently in the game, and South Africa will have taken note of the Zimbabwean captain’s success.

But they know the visitors will need more where he comes from.

And there doesn’t seem to be much more.

Proteas coach Ottis Gibson is relishing the opportunity to pick his aces from a full deck ahead of the historic day-night pink ball cricket test ...
Sport
4 years ago

AB de Villiers opens up on life and cricket

He gets nervous even when batting in back-yard cricket and he reveals which bowler troubled him the most.
Sport
4 years ago

Ideally, 2017 should have been a crowning year for former Cricket South Africa (CSA) chief executive Haroon Lorgat.
Sport
4 years ago