SA and India must not expect a green mamba at Centurion 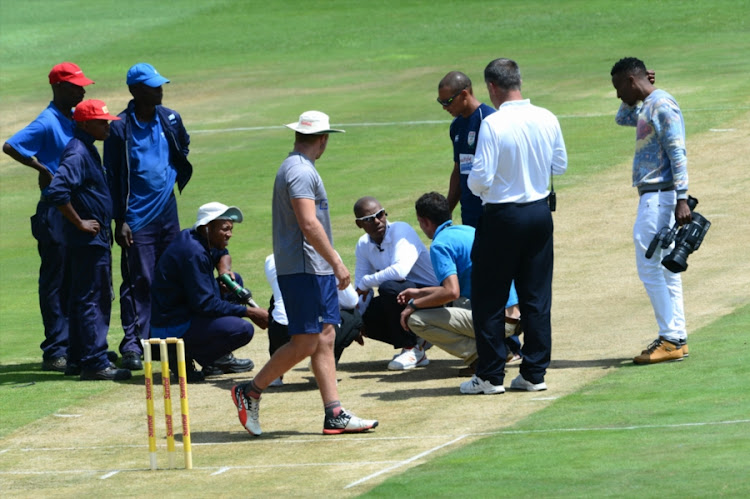 When South Africa and India arrive at SuperSport Park in Centurion for the second Test here on Saturday morning‚ they must not expect a green mamba.

There will still be the usual pace‚ bounce and movement to assist the quicks and head groundsman Bryan Bloy said he is working hard to put together a good Test wicket that will hold for five days.

“We are preparing a good wicket that will offer good competition between bat and ball and won’t deteriorate much as the days go by‚" said Bloy as he continued with preparations.

"During the first Test in Cape Town‚ from a distance I thought the ball moved around a little but we will do our best to prepare a much better wicket here in Centurion.

“There is no rain forecast from Thursday and I am hoping that the pitch will be a good one‚ but it will definitely not be a green top.

"We are doing our best to put together a good wicket and the challenge is for the boys to rock up here and do their thing.”

In the first Test where 40 wickets fell in Cape Town‚ the batters initially struggled to find their rhythm as the fast bowlers ran riot and that trend is likely to continue.

Given the expected conditions where fast bowlers are once again going to play an important role‚ it remains to be seen if coach Ottis Gibson and captain Faf du Plessis will be tempted drop spinner Keshav Maharaj.

Maharaj bowled only 10 overs in the Cape Town Test match.

Dale Steyn has been ruled out of the match and the entire series with a heel injury and Lungi Ngidi‚ Duanne Olivier or all-rounders Chris Morris and Andile Phehlukwayo may be picked as replacements to join Morne Morkel‚ Kagiso Rabada and Vernon Philander in a four-pronged pace attack.

Speaking after the first Test‚ Philander‚ who was named man-of-the-match‚ said the pitch was not overly aggressive and there were times when it was a little bit flat.

“Newlands is a wonderful place to play cricket‚" he said.

"I don’t think it was (an) overly aggressive wicket.

"I think there were times when it was a bit flat.

"I felt there were times when batters could get in and score runs but the theatre and atmosphere around Newlands was just amazing‚” he said.

Why Pierre de Bruyn could become most emotional man on Saturday

Overthinking and underdoing can stifle the strengths of cricket teams‚ making them better at talking a good game than playing it.
Sport
3 years ago

Proteas fast bowler Kagiso “KG” Rabada has climbed to the summit of the ICC Test bowler player rankings after he helped South Africa to an exciting ...
Sport
3 years ago

Former Australia captain Ricky Ponting has been named as an assistant to national coach Darren Lehmann for the triangular Twenty20 series against New ...
Sport
3 years ago