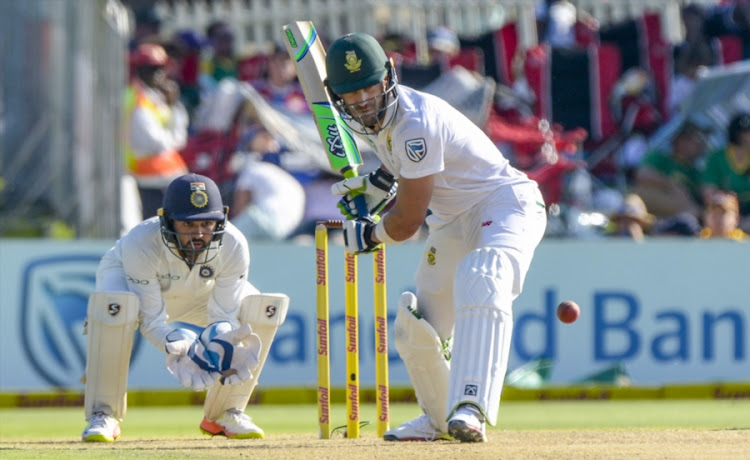 South Africa reached stumps of the first day of the second test against India on 269/6 after 90 overs as they lost three quick wickets in the third session to leave India with momentum.

When they resume on Sunday, Keshav Maharaj and skipper Faf du Plessis will resume on respective scores of 10 and 24 and add significantly on the scoreboard and to give India something to think about.

Though pitch was on the slower side, Aiden Markram and Hashim Amla found a way to put notable scores of 94 and 84 respectively while the rest of the failed to cover themselves in glory on this day of ups and downs.

Dean Elgar and AB de Villiers only contributed 31 and 20 runs respectively while Quinton de Kock and Vernon Philander failed to contribute as they returned back to the pavilion on golden ducks.

Markram was unlucky to be given out on 94 after he edged the ball to be was caught behind by Parthiv Patel from the bowling of Ravichandran Ashwin as India began to make inroads in the second session.

The 23 year-year old reviewed the umpire’s decision immediately but he was just delaying the inevitable as Ultraedge showed that the ball came off his bat and he was on his way agonisingly close to his third test century.

The knock of Markram, who was run out for 97 on his debut against Potchefstroom earlier in the year, came from 150 balls and it included fifteen boundaries and he was going at an impressive strike rate of 62.67.

The other notable contributor for South Africa was Hashim Amla, who continued with his good form here at Centurion in test matches, with a score of 82 off 153 runs before he was run out in the third session by Hardik Pandya.

The other wickets to fall for South Africa were of AB de Villiers, who was run out, Quinton de Kock and Vernon Philander, who was also run out, in the last session as South Africa ended six wickets down and India with the momentum.

Markram falls in nervous 90s as SA plod on

Aiden Markram was dismissed six runs shy of his third century before tea as South Africa continued to consolidate on the first day of the second test ...
Sport
4 years ago

Markram and Elgar guts out first session at SuperSport Park

Aiden Markram scored a gutsy half-century to help South Africa to 78/0 after 27 overs at lunch of day one of the second test in Centurion on Saturday.
Sport
4 years ago

Highly-rated Titans fast bowler Lungi Ngidi becomes the 99th South African player to represent the Proteas at test level after he was included in the ...
Sport
4 years ago

Proteas captain Faf du Plessis sounded unsure of the SuperSport Park pitch on Friday‚ saying that it has an unusual thick layer of brown grass.
Sport
4 years ago