Not before time, Centurion's in a spin 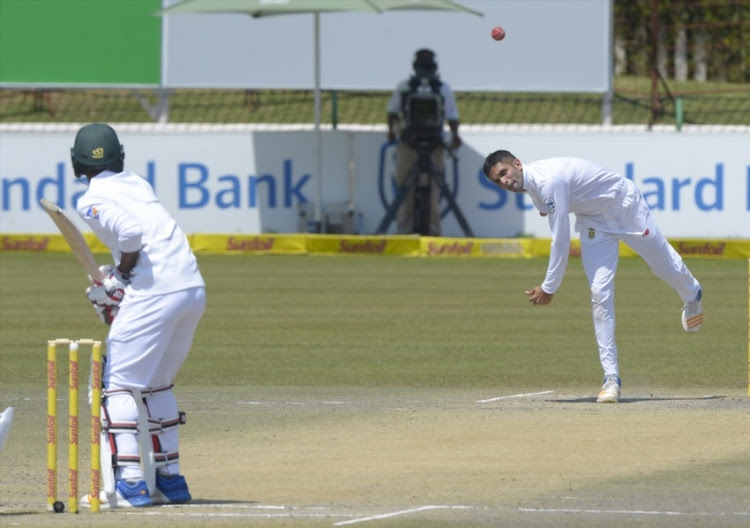 Keshav Maharaj of South Africa during day 5 of the 1st Sunfoil Test match between South Africa and Bangladesh at Senwes Park on October 02, 2017 in Potchefstroom.
Image: Sydney Seshibedi/Gallo Images

Centurion lives up to its reputation as a ground where fast bowlers expect to be greeted by St Peter at the gate.

The christians among them, anyway.

In the 22 tests played here before the current game between South Africa and India, a bowler has claimed 10 wickets five times.

Down the road at the Wanderers, which has seen 37 tests and is also a friend of pace, seven 10-wicket hauls have been recorded.

At Newlands, home to South Africa’s most balanced pitch and its most frequent test venue with 55 games, bowlers have claimed 10 a round 10 times.

That means spectators have seen a 10-wicket haul in more than a fifth of tests played in Centurion.

One of the Wanderers’ magnificent seven was a slow poisoner — Hugh Tayfield — and all of six of Newlands’ perfect 10.

But not once has a bowler who etched their name onto Centurion’s 10-wicket honours board been a spinner.

The converse of all that is also true.

Centurion’s average first-wicket stand of 28.47 makes it the most difficult place in the world to open the batting among current test venues.

No other South African ground is in the top 10.

Things get easier for batsmen as the innings wears on at Centurion: all four of South Africa’s other regular test grounds average fewer runs for any wicket.

But it is firmly in the bottom half of this draw worldwide, coming in at No. 70 among all 114 test grounds.

Not much of that is likely to change in the next few days, except perhaps in one aspect.
Spin bowling aficionados will not have missed the fact that Ravichandran Ashwin will start the second day’s play with three wickets already in his back pocket.

So two more in South Africa’s first innings will get him halfway to becoming the first slow bowler to own 10 here. Indeed, only four spinners feature among the 31 five-wicket-hauls taken at Centurion.

Off-spinner Ashwin isn’t that much more successful in Asia — where he averages 22.75 — than elsewhere, where that number is 24.97. But in three tests in South Africa he had taken only five wickets at 44.40.

That was, of course, before Saturday, when an unusually non-green, more like khaki Centurion surface offered turn almost immediately Ashwin bowled his first over — the 20th of the match, or the eighth before lunch.

Last August at Centurion, Kane Williamson tossed Mitchell Santner the ball for the first time in the 18th over.

The New Zealand left-arm spinner lasted two overs before disappearing until the 54th.

But Santner’s no Ashwin, who bowled until lunch after being introduced on Saturday, continued immediately afterwards, completed a first spell of 8-5-8-1, delayed the taking of the new ball for 6.2 overs, and then shared it.

And to think he might have been deemed surplus to requirements …

“Two days before the game it looked like we were going to play an all-seam attack,” Ashwin said after the close.

“And then, when we walked onto the ground [on Friday], [the pitch] was white in colour — the grass was coming off.

“All of a sudden I really had to pull myself back and think, ‘I am in the game now’.

“[On Saturday] when we came to the ground, it looked like a wicket that was really flat and [we] had to have a spinner in the game.”

By stumps, one of the batsmen Ashwin was bowling to was Keshav Maharaj, South Africa’s left-arm spinner.