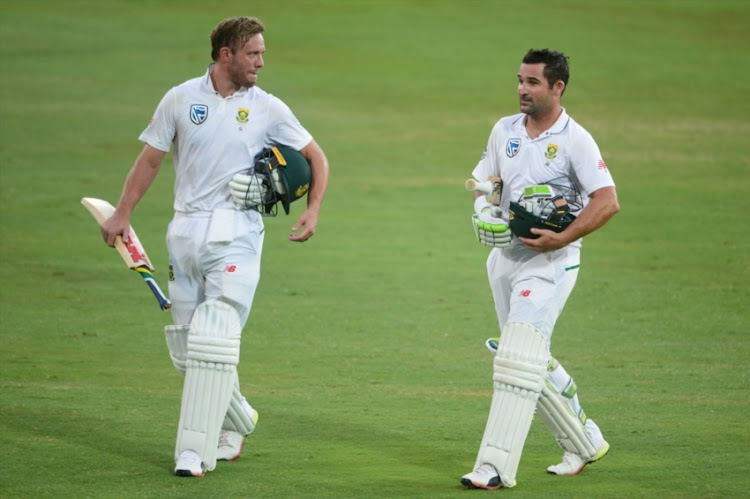 AB de Villiers and Dean Elgar of the Proteas walk off due to bad light stopping play during day 3 of the 2nd Sunfoil Test match between South Africa and India at SuperSport Park on January 15, 2018 in Pretoria.
Image: Lee Warren/Gallo Images

South Africa have taken the initiative against India as they reached early stumps due to bad light on day three at SuperSport Park on Monday on 90/2 and a second innings lead of 118.

The Proteas resume on Tuesday morning with AB de Villiers sitting on 50 off 78 balls and opener Dean Elgar on 36 off 78 balls but with lots of work to increase South Africa’s advantage and frustrate India on what may turn out to be an important day of this Test match.

De Villiers’ half century included six boundaries while Elgar managed four and one maximum in his knock.

When stumps were called‚ De Villiers and Elgar were on a highly promising partnership of 87 off 141 balls and Indian skipper Virat Kohli will be desperate to see the back of one of them or both in the first session on Tuesday.

Earlier in the day‚ Morne Morkel sparkled with the wickets of Ishant Sharma and Indian captain Virat Kohli as South Africa restricted India to 307 and the visitors trailing by 28 runs.

The star of India’s innings was Kohli‚ who scored a sensational knock of 153 off 217 balls‚ which included 15 boundaries for his 21st century and the second against South Africa.

South Africa’s second innings did not get off to a good start as they lost the early wickets of Aiden Markram and Hashim Amla in quick succession during the second session to give India some hope of rattling the entire batting line up.

Markram and Amla returned to the pavilion having scored one run each after they were given lbw from the bowling of inspired Jasprit Bumrah who got his bowling spell off to a sensational start.

It took a few uncomfortable but honest conversations with coach Mark Boucher to turn an unfit Lungi Ngidi into a South African Test bowler with a ...
Sport
4 years ago

When De Villiers arrived on the crease to join Dean Elgar in the sixth over‚ the Proteas were in a spot of bother and sitting dangerously on 3/2 but they showed their experience to carry the team our of muddied waters and to safety.

For good measure and advantage for the Proteas‚ South Africa still have Du Plessis‚ Quinton de Kock‚ Vernon Philander‚ Keshav Maharaj and the rest of the tail in the form of Kagiso Rabada‚ Morne Morkel and Lungisani Ngidi in the bank.

The match was disrupted by rain‚ which came out of nowhere‚ for about an hour in the final session and there was not much of play after the restart as umpires called early stumps due to bad light after consulting with the two teams.