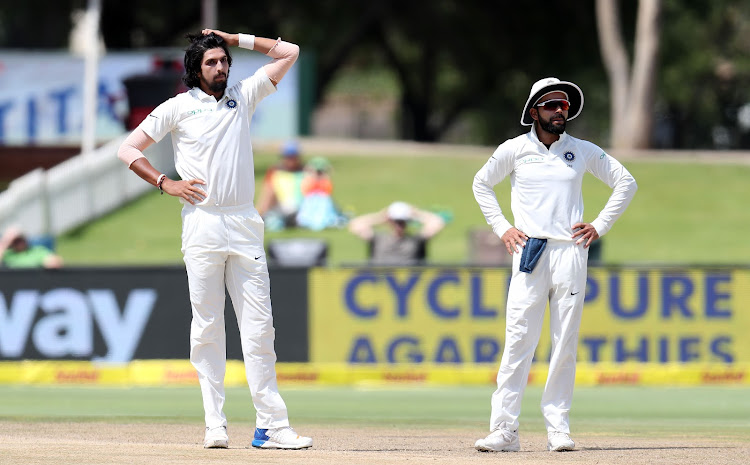 India face the monumental task of looking the 252 runs required for victory in the second Test against South Africa at SuperSport Park without inspirational captain Virat Kohli.

Kohli‚ who scored 153 in the first innings‚ was given out lbw from the bowling of Lungi Ngidi in the closing stages of the third session in a key moment that is likely to have a huge impact on the direction of this Test match on the final day on Wednesday.

At the close of play on Tuesday‚ India were on 35/3 and they must pull one of the highest successful run chase in a Test match here in Centurion to win and square the series 1-1 with the final encounter scheduled for Johannesburg next week.

They will resume on Wednesday with Cheteshwar Pujara and wicketkeeper Parthiv Patel on respective scores of 11 off 40 and 5 off 24 and lots of work to be done to revive their wrecked second innings.

India still have capable batsmen like Rohit Sharma‚ Hardik Pandya‚ Ravichandran Ashwin and the rest of the tail made up of Mohammed Shami‚ Ishant Sharma and Jasprit Bumrah‚ but it is unlikely that they will be able to mount a fight back on the last day.

SA got the defence of their score to a good start when Kagiso Rabada bowled out Murali Vijay for just nine runs with a low bounce delivery that got an inside edge before crushing his leg stump to bring Pujara to the crease.

It was not long before India lost the second wicket as KL Rahul punched the ball straight to point from where Kashav Maharaj claimed a good catch from the bowling of Ngidi having scored only four.

Ngidi was enjoying the spell of his life and it was no surprise when he trapped Kolhi for lbw having scored only five runs to deal India a heavy blow.

Before India went in to bat‚ South Africa was bowled out for 258 and with a lead of 286 for the visitors to win this match and tie the series at 1-1 with one to go.

South Africa started the defence of their total with bad news that Aiden Markram will not be fielding as a result of a left quadricep strain which needs rehabilitation‚ making him a doubt for the third test at Wanderers next week Wednesday.

Markram was replaced by Theunis de Bryun on the field.

In the first session‚ South Africa lost the three wickets of De Villiers (80)‚ Elgar (61) and Quinton de Kock (12) with Indian fast bowler Mohammed Shami the destroyer in chief as the Proteas went to lunch sitting on 163/5 and a lead of 201 runs.

In this session‚ De Villiers and Elgar managed a valuable partnership of 141 as they started to rebuild the innings on Monday.

In the second session‚ it was the turn of Ishant Sharma to wreck havoc with the middle order as he claimed the wickets of Vernon Philander (26) and Keshav Maharaj (6) for South Africa to go to tea having scored 230/7 and a lead of 258.

India finished off the South African batting lineup in the early stages of the third session with Rabada (4)‚ skipper Faf du Plessis (48) and Ngidi (1) falling to the bowling of Shami‚ Jasprit Bumrah and Ravichandran Ashwin respectively.