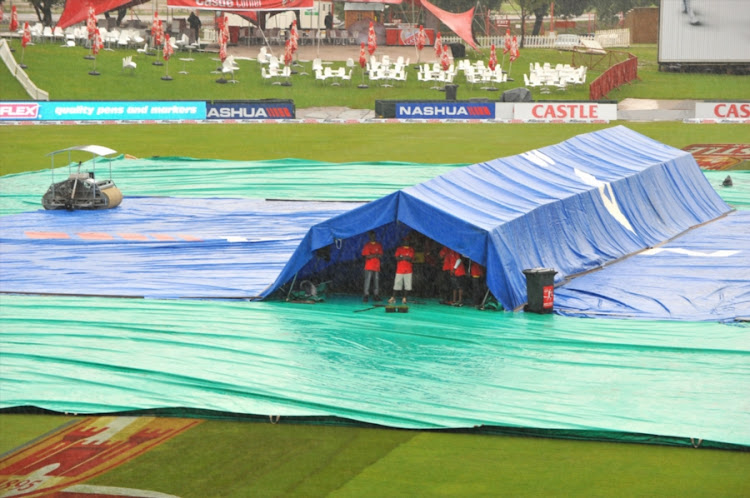 Capetonians in Centurion at 3:19pm on Monday could have cried: a sky that had been heavy with heat and lumpen with clouds was leaking rain.

One of the first drops of the stuff hit AB de Villiers smack in the eye as he awaited the approaching Mohammed Shami‚ which led the umpires to call a halt.

An hour passed before another ball was bowled.

But only 31 had been sent down when‚ at 4:46pm‚ almost two hours before the rescheduled close‚ with the floodlights burning bright and turning to neon the colours all around‚ the umpires decided it was too dark to play cricket.

Dean Elgar and De Villiers‚ who had taken South Africa from 3/2 to 90/2 and the lead to 118‚ seemed satisfied as they strolled towards the dressingroom.

The Indians were unamused. Kohli stalked off the field in a dark cloud all of his own‚ bounded up the stairs and darted daggerishly into the match referee’s room.

With intent indeed. Oh captain‚ India’s captain was quickly followed there‚ like a tracer bullet‚ by Ravi Shastri.

Almost an hour passed‚ in which time what was left of the crowd was treated to Desmond and the Tutus’ “Pretoria Girls” with its #MeToo lyrics: “Put some shoes on Pretoria girl/’Cause I’m taking you out on the town tonight”‚ before the umpires reappeared and sauntered to the middle.

Paul Reiffel flipped the bails off the stumps at the West Lane end‚ walked to the Hennops River end and placed a light meter just so on top of those stumps.

Then the umpires stood and looked for all the world as if they were waiting for the next Gautrain back to Joburg.

On the further reaches of the outfield television crews set up lights and cameras and wheeled out their pundits; vultures waiting for the day’s play to be declared dead.

Presently Kohli materialised on the boundary and set off on a march‚ arms slicing the dull air‚ legs thrusting forward‚ towards the pitch.

Halfway there he seemed to tweak his intent‚ softening his stride and shoving his hands into his pockets.

Once arrived‚ Kohli spoke with the umpires‚ apparently calmly‚ and alternated between looking at the light meter and at the sky above as if trying to connect dots between them.

Not long after that‚ and with the sky ever more soupy‚ the announcement that play had been abandoned echoed gloomily.

Five minutes later the sun was pushing through the clouds and six minutes after that — 24 minutes before what would have been the close — the ground dripped with the golden gorgeousness of a Highveld evening in the afterglow of a thunderstorm.

You could see forever but you couldn’t see any cricket.

South Africa had lost two second innings wickets of Aiden Markram and Hashim Amla in quick succession at tea of day three here at SuperSport Park in ...
Sport
4 years ago

India reached 287/8 at lunch on day three of the second Test against South Africa at SuperSport Park in Centurion with their inspirational captain ...
Sport
4 years ago

It took a few uncomfortable but honest conversations with coach Mark Boucher to turn an unfit Lungi Ngidi into a South African Test bowler with a ...
Sport
4 years ago