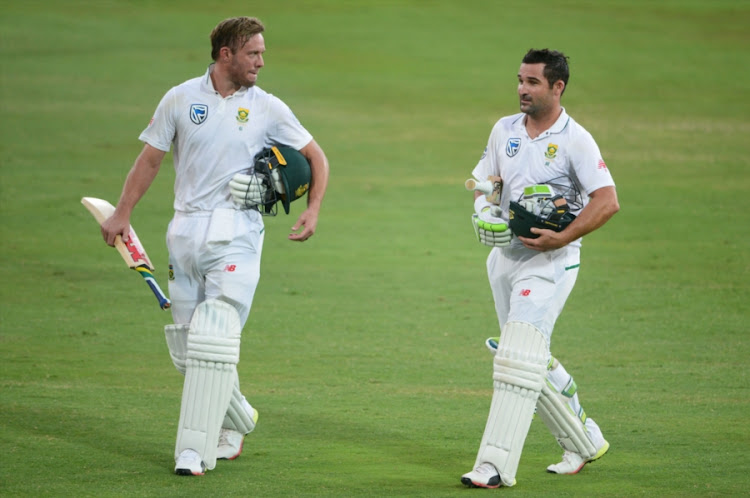 AB de Villiers and Dean Elgar of the Proteas walk off due to bad light stopping play during day 3 of the 2nd Sunfoil Test match between South Africa and India at SuperSport Park on January 15, 2018 in Pretoria, South Africa.
Image: Lee Warren/Gallo Images

South Africa lost the wickets of AB de Villiers‚ Dean Elgar and Quinton de Kock in the first session of the fourth day at SuperSport Park but they will consider themselves slightly ahead with a second innings lead of 201.

At the lunch break on Tuesday‚ they were on 173/5 with captain Faf du Plessis on 12 off 43 balls and all-rounder Vernon Philander supporting him on 3 off 22.

The loss of the three wickets was not ideal but South Africa will not be too disheartened as they approach the second session with Du Plessis and Philander still batting.

They will be looking to increase the 83 runs they added on Tuesday morning.

The first wicket to fall on the day was De Villiers having scored a well-taken 80 off 121 when he was caught behind by India wicketkeeper Parthiv Patel from the bowling of Mohammed Shami.

During his time at the crease‚ De Villiers put together a useful partnership of 141 with Dean Elgar as they dragged the Proteas from 3/2 in the second session on Monday after the early losses of Aiden Markram and Hashim Amla.

He was followed by Elgar on 61 off 121 when he was caught by KL Rahul at deep square leg for Shami’s second wicket of the day‚ which was a just reward for his patience as he worked hard in the earlier overs of the morning.

It could have been a lot worse for South Africa as Du Plessis received a lifeline when he was dropped by Rahul at backward short leg to leave his captain Virat Kohli unimpressed.

South Africa lost the third wicket when De Kock returned back to the pavilion for 14 runs after he was caught behind by Patel from the bowling of Shami who was a having a good morning with the ball in hand.