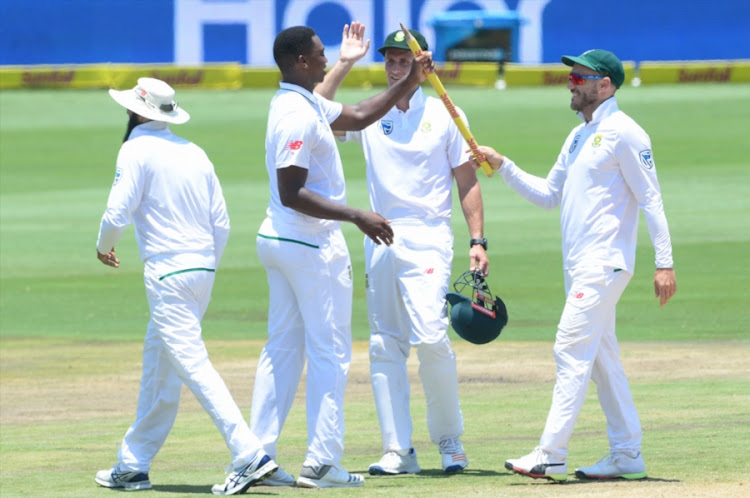 South Africa captain Faf du Plessis hands a stump to Lungi Ngidi after the debutant fast bowler took 6 wickets for 39 runs during day 5 of the 2nd Sunfoil Test match against India at SuperSport Park on January 17, 2018 in Pretoria. South Africa won by 135 runs to take an unassailable 2-0 lead in the three-match Test series. The third and final Test starts at the Wanderers in Johannesburg on Wednesday 24 January.
Image: Lee Warren/Gallo Images

There's nothing like a run-out that gives you a window into a batting team's scrambled frame of mind.

Perhaps it was also fitting that it was Lungi Ngidi‚ who collected test best figures of 12.2-3-39-6‚ who got the ball rolling when his smart fielding fooled India's current king of run-outs Cheteshwar Pujara into taking a fatal third run.

After all‚ Ngidi's first tangible act in Test cricket was the running out of Pujara in the first innings.

The debutant was a key figure in the second innings steam-rolling of India and his contributions cannot be scoffed at.

He needed only 15 minutes of the fifth morning to ensure the Proteas don't have to endure another afternoon roasting in the hellishly hot Pretoria sun.

However‚ it was in his primary employment as a bowler where he did the most damage.

Being a son of the KwaZulu-Natal soil‚ it was fitting that the Distruction Boyz's hit song “Omunye” was played at the fall of Hardik Pandya's wicket. India literally collapsed in a heap

1) Reeling in the big fish

Ngidi's fourth evening dismissal of the combustible Virat Kohli pretty much set up the morning procession.

As one cricket scribe pointed out on Twitter‚ the head of the snake had been unceremoniously removed and the rest of the body was to follow.

It was an important dismissal as India were heavily reliant on their aggressive captain to lead the ground record chase.

An hour of his magical and commanding batting on the fourth evening could have and most probably would have changed the complexion of not only the match‚ but the series.

His enchanting first innings 153 reminded South Africa of his class and his willingness to stick to what works for him.

Ngidi's elation was palpable to a point where Kohli turned and glared at the hulking 21-year-old‚ but there was nothing he could do but stare.

The feeling of being robbed of a slice of history of being the first Asian side to win a Test match in Pretoria was too much for Kohli to bear.

However‚ this is South Africa's fortress and more importantly AB de Villiers' playground.

Without his second innings 121-ball 80 that pretty much took the turgid surface out of the equation‚ India would have fancied their chances.

The South African innings moved along swiftly when De Villiers and Dean Elgar were stitching together their match-defining 141-run partnership and it proved to be major difference.

It was the highest partnership of the match‚ highlighting the importance of two set batsmen making the most of what was a delicately poised situation.

There's also the significant matter of Parthiv Patel‚ whose glove work has not matured with his age having debuted as a chubby-cheeked 17-year-old against England in 2002.

The fact that India have called up Dinesh Karthik‚ who once replaced him in one of his earlier spells as India's keeper‚ spoke volumes about the lack of trust in his abilities.

One wonders if he had an iota of the confidence shown by South Africa's fielders‚ how different things would have been.

The best example was that of Morne Morkel's superb running catch to get rid of Patel during the second innings cascade.

Morkel may have a safe pair of hands but his giraffe-like mobility often hinders him.

His graceful movement to his right and his pin-point judgement to snare a beauty of a catch of Kagiso Rabada was a window into the positivity radiating through the Proteas set-up.

It was a pity he had to be upstaged by the gazelle-like De Villiers‚ whose grab off an errant Rohit Sharma pull served to hasten India's demise.

Virat Kohli's dismissal shortly before stumps on Tuesday livened up a match that for an intolerable length of time earlier in the day drifted into ...
Sport
4 years ago