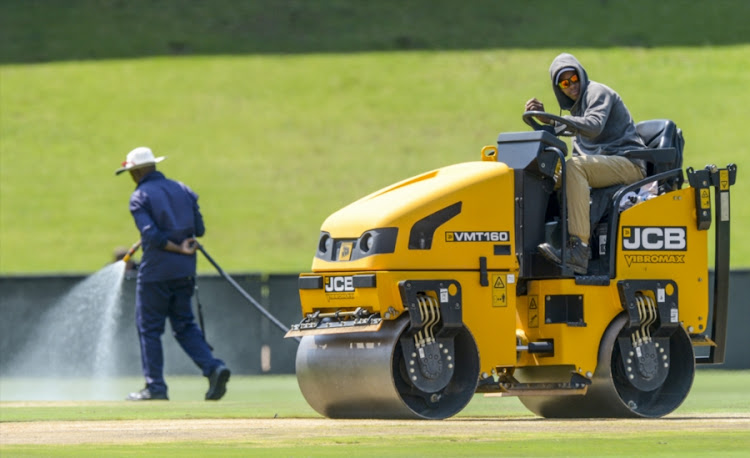 If all goes well‚ Bryan Bloy will be handed back his belt and shoelaces by sunset on Wednesday.

As things stand he remains on suicide watch.

Bloy is Centurion’s groundsman‚ and as such responsible — if you believe the prevailing narrative — for the apparently appalling‚ shocking‚ shouldn’t-be-allowed fact that the second test between South Africa and India has reached a fifth day.

That makes him‚ in ever expanding circles‚ a traitor to the cause of keeping South Africa’s foot on India’s throat.

How dare the bloody man gift the visitors the advantage by preparing a pitch that is more Hyderabad than Highveld?

But Bloy‚ who is undertaking his first test‚ would be within his rights to demand explanations for how‚ if the pitch is the cadaver it has been condemned as‚ 11 wickets fell on Tuesday — all but one of them to fast bowlers.

For a start he should bang on South Africa’s dressingroom door and stick a finger in the faces of Faf du Plessis‚ who called the surface “unknown” even before the match started‚ Morne Morkel‚ who said he felt as if he was bowling in the subcontinent‚ and Dean Elgar‚ who was bitterly “disappointed”.

Mohammed Shami waded in on Tuesday: “I don’t know what they were thinking when they made this wicket.”

Get over yourselves already.

Closer to what matters is that India go into the fifth day needing 252 more runs to win‚ and that they have seven wickets standing with which to get them.

Crucially‚ their talismanic captain has been dealt with.

Virat Kohli‚ scorer of 153 in the first innings — a monumental performance in every sense — was sent back to think again for only five by Lungi Ngidi‚ a young man with pace and gees to burn‚ who pinned Kohli leg-before like a butterfly to a wheel.

No doubt Bloy breathed a special sigh of relief at that strike‚ which came in the ninth over before stumps.

But the story less told is that we need to thank Bloy for ensuring the match has boiled up into a proper contest between bat and ball and everything else that makes test cricket infinitely more enthralling than‚ say‚ those 90 minutes of nothing called football.

South Africans should be thrilled that their team have found a way to earn the advantage in conditions that do not‚ or so they feel‚ suit their gun pace attack.

If they had played this kind of cricket in India in November 2015 they wouldn’t have been thrashed quite so badly.

It is undeniable that the conditions at Centurion this time aren’t tailored as tightly to South Africa’s strengths as the booming pitch that helped the home side win the first test at Newlands in‚ effectively‚ three days.

That was a superb surface‚ a stage for visceral cricket played at a scarcely believable tempo by teams who were scared of nothing.

In fact‚ it was too good a pitch. So much so that almost anything that followed was going to fall short of expectations.

But a series‚ if it is to have context‚ must ebb and flow and offer contrast and counterpoint.

Only then can it cement its slow-burning character. Bloy has provided for exactly that‚ and hats off to him.

Newlands was a memorable one-night stand. Centurion has blossomed into a torrid love affair.

It will end in screams‚ tears and thrown crockery sometime on Thursday‚ and when it does many should seek Bloy out to tell him‚ “It’s not you‚ it’s us.”

Virat Kohli's dismissal shortly before stumps on Tuesday livened up a match that for an intolerable length of time earlier in the day drifted into ...
Sport
4 years ago

India face the monumental task of looking the 252 runs required for victory in the second Test against South Africa at SuperSport Park without ...
Sport
4 years ago