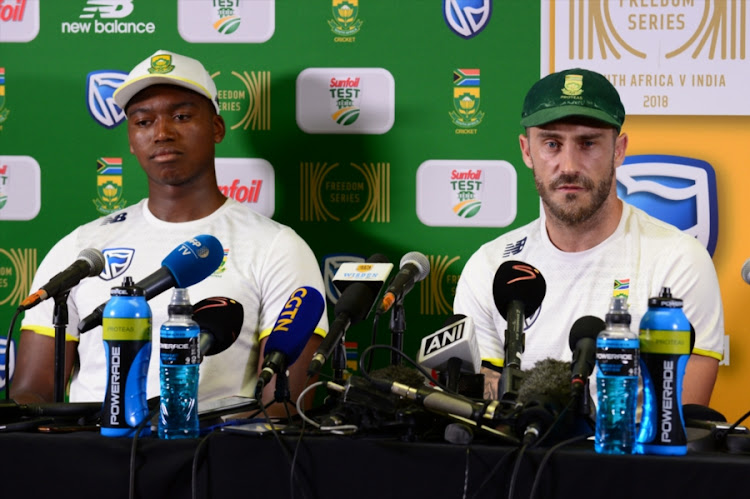 Lungi Ngidi and Faf du Plessis of the Proteas during day 5 of the 2nd Sunfoil Test match between South Africa and India at SuperSport Park on January 17, 2018 in Pretoria, South Africa.
Image: Lee Warren/Gallo Images

Sometimes it’s difficult to see the trees of drama for the forest of going through the motions in a match as nuanced with both as the second Test between South Africa and India in Centurion.

But not on Wednesday‚ the last day — or the single‚ albeit lengthened‚ session South Africa needed to take seven wickets and surge to victory by 135 runs and clinch the series with a game to spare.

Stay with us‚ sportslovers‚ because at this point this needs to become a riff on rugby starring Morne Morkel as David Campese‚ AB de Villiers as Henry Honiball‚ and Lungi Ngidi as Jonah Lomu.

Morkel‚ who claimed four scalps in the first innings but was wicketless in the second despite his disciplined bowling‚ provided the first of the Tri-Nations treasures in the seventh over of the day‚ when Parthiv Patel hoisted Kagiso Rabada towards deep fine leg.

Morkel‚ galumphing for all his worth to his right to make many metres of ground‚ untangled his gangly spangle of arms and legs adeptly enough to dive and take a superb catch millimetres above the turf.

He also speared his arms straight into the sky to prevent the ball being dislodged from his hands as his long‚ lean body crashed to earth.

Then the fun started.

As he went‚ Morkel uppercutted the air in triumph with emphatic swoops of those long arms of his and roared his delight‚ which made him look like John Cleese trying to eject a guest from Fawlty Towers.

Then‚ with his last few steps before he was enveloped in the happy madness of his comrades‚ Morkel broke into a goose step that would have done Campese proud.

Rabada was again the bowler when Rohit Sharma hooked towards fine leg‚ where De Villiers made a 20-metre glide over the grass to look like a few simple steps.

That done‚ he leapt forward at exactly the right moment and made another stunning‚ low grab.

De Villiers threw the ball up in joy‚ box-kicked it like the flyhalf he used to be‚ caught it again — and dotted it just so on the outfield before speeding away to celebrate his try. A touch flashy for Honiball‚ but what the hell.

Like Lomu‚ Ngidi was an ominous presence regardless of whether he had the ball in hand.

Men that tall and blessed with shoulders to match — as well as a silent‚ latent growl of violence to be visited on the suspecting and the unsuspecting alike — need merely to be seen to work their magic.

Just like the spectre of Lomu looming on the wing scared the bejaysus out of the unfortunates who had been cursed with the impossibility of stopping him‚ so Ngidi looked like he was about to take someone’s head off whether he was thundering into his delivery stride or walking in from mid-on.

After he claimed the fifth of his six wickets‚ when Mohammed Shami‚ in full‚ shameless retreat from a rising short delivery‚ spooned a far simpler catch to Morkel at mid-on‚ something spiritual‚ happened.

Once the South Africans had got the instinctive yelping and yawping out of their system‚ they gathered around their tower of smiling‚ beautiful blackness and a curious calm settled on the scene.

It looked‚ from the distance of the boundary‚ like a prayer was being said and given due reverence.

Not a man seemed to move and not a sound was heard for a long‚ poignant moment as‚ perhaps‚ the collective gave thanks for what the individual had wrought‚ and on debut on his home ground‚ nogal.

You could‚ in those precious seconds‚ see what South Africa’s team could become.

You could see the future. And it’s here.

Of the 14 test tons scored by a variety of Indian Test batsmen in South Africa since the 1992/03 Friendship Series‚ none of them have come in Test ...
Sport
4 years ago

There's nothing like a run-out that gives you a window into a batting team's scrambled frame of mind.
Sport
4 years ago