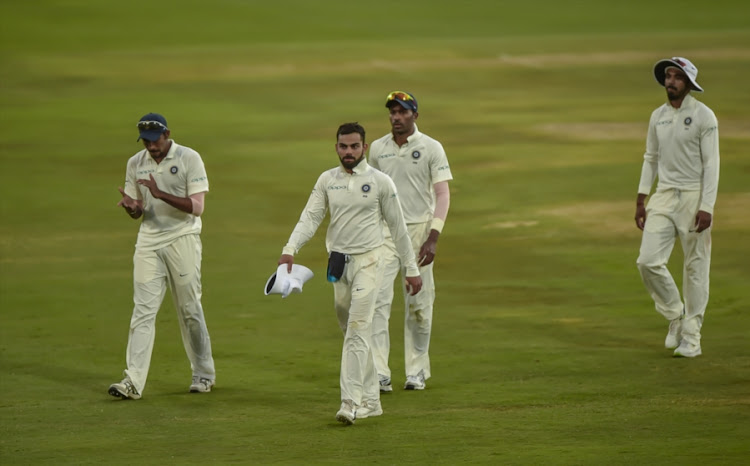 Virat Kohli (c) of India leading his players of the field as bad light stopped play during day 3 of the 2nd Sunfoil Test match between South Africa and India at SuperSport Park on January 15, 2018 in Pretoria, South Africa.
Image: Christiaan Kotze/Gallo Images

India are facing the embarrassing possibility of a whitewash by bitter rivals South Africa and the visitors' captain Virat Kohli hopes that internal discussions will spark a much better showing in the third and final Test at the Wanderers from Wednesday.

The Proteas beat India by 72 and 135 runs in Cape Town and Centurion respectively and Kohli said all the players have been spoken to individually in a bid to get to the bottom of the reasons behind the losses in the two matches.

“Everyone has been spoken to individually to discuss what went wrong and why‚" he said.

"The guys have taken it well and going forward they understand that every time we step on the field it is time to correct mistakes‚” he said at Wanderers on Tuesday.

“And that is how you progress on the international level‚ that is how I progressed throughout my career to reach this stage.

"I am sure that everyone wants to rectify their mistakes and help us to consolidate and try to win this Test match.

"It is a chance for everyone to step up and change things for us and be the difference.”

Asked for his opinion on the pitch that has been the talking point this week‚ the flamboyant Indian skipper said he has noted green grass on it and he won’t be surprised if there is considerable pace and bounce.

“The wicket is definitely very different from the last game in Centurion‚"he said.

"I would say it is similar to Cape Town but with more grass on it‚ which is something that we expected.

The Proteas are seriously considering dropping spinner Keshav Maharaj and going with an all seam attack of Lungi Ngidi‚ Kagiso Rabada‚ Vernon Philander and Morne Morkel.

India are also thinking along those lines.

“Chances of anything happening are very bright‚" Kohli said.

"You know there is a lot of grass on the pitch and we will definitely look at that option of going with four seamers.

"I am sure that both teams will be thinking along those lines.

"As I said we have taken 40 wickets so far and we must figure out what is the best option to pick up 20 again for this Test match.

"We are going to have a discussion on that matter and the other combinations about the rest of the team.”