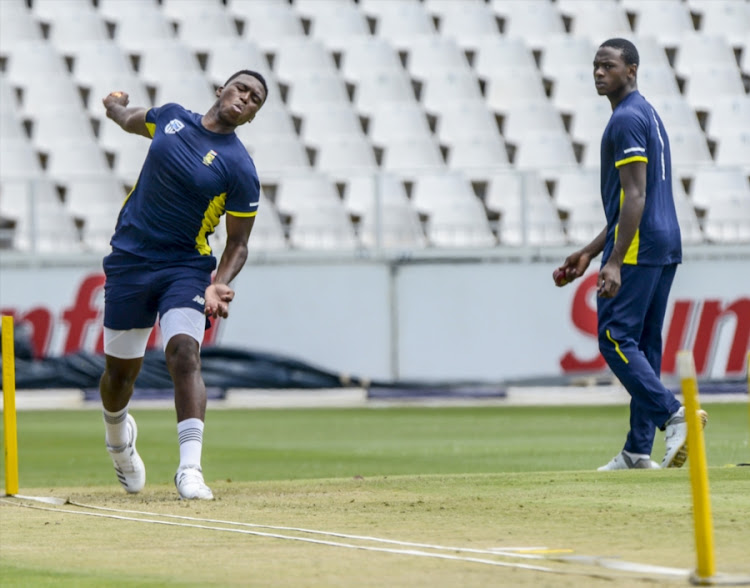 In his 173 innings in first-class matches there between December 1972 and February 1995‚ Cook made 14 centuries.

And‚ more often than not‚ he did so opening the batting.

Cook thus batted at the Wanderers in more than a third of his 475 innings in a first-class career that took him to 48 different grounds.

He was‚ then‚ more than 60% more successful at other venues than at his major home ground.

So‚ what does it take to score centuries at the Wanderers?

“Luck! Luck! Put it down to good luck‚ a lot of luck‚” Cook blurted from behind a chuckle on Tuesday.

“I scored more than that at Somerset in three years — I batted on a decent wicket.”

Not quite. Cook racked up 13 centuries at the County Ground in Taunton between April 1989 and September 1991.

But in only 44 innings‚ or just more than a quarter of the number of times he took guard at Johannesburg’s cauldron of a stadium and on its unforgiving 22 yards of trouble.

“It always rewards you for shots — and you can play different shots — because there’s always bounce‚” Cook said.

“So you can always pull and cut.

“And you know it’s going to bounce‚ so you can leave on length.

"But it’s about whether you can do that mentally.”

What makes batting at the Wanderers such a challenge that only one batsman has topped 1 000 test runs there‚ and he is the peerless Jacques Kallis?

“The sideways movement was the most difficult thing‚” Cook said.

“It was so green. You could bat nicely for an hour‚ and then get an unplayable ball.”

Fifty-four centuries have been scored in the 37 tests played at the Wanderers‚ among them double tons by Greg Blewett‚ Adam Gilchrist and Brian Lara.

Daryll Cullinan’s undefeated 337 for Transvaal against Northern Transvaal in October 1993 tops the list of 26 scores of 200 or more that have been made at the Wanderers in first-class cricket — an honour role that features not Jimmy Cook but his son‚ Stephen‚ who scored 200 not out for Gauteng against North West in November 2006.

But‚ in the 55 tests at the Wanderers’ polar opposite in every sense‚ Cape Town’s Newlands‚ spectators have been treated to 96 centuries.

Cook ended his first-class career at the Wanderers in February 1995‚ batting at No. 6 for Transvaal against Eastern Province for scores of 12 and 54. Had the nature of the pitch changed in the ensuing 23 years?

“I don’t know that the Wanderers is quite as quick as it used to be but it’s still got some decent pace‚” Cook said.

What shouldn’t change is the approach batsmen bring to the middle with them.

“They should try and play positively on that type of surface; you shouldn’t go into your shell.”

“Quite often we used to win the toss and bat‚” Cook said.

“Even though we knew it was going to go all over it went slowly‚ so you could adjust and adapt.

“It can be a struggle for those first two hours because you can easily lose four guys. But if you get to lunch on 60 or 70/1 then you’ve done the right thing.”

The Wanderers pitch being prepared for Wednesday’s third Test between South Africa and India has been written up as the antithesis of the uncharacteristically brown‚ slow Centurion surface on which the teams played last week.

So‚ a green flier would seem to be in the offing.

But the pitch wasn’t as green on Monday as it was last week‚ although it harboured not a hint of brown.

“If they leave a lot of grass on it tends to be slower on the first day‚ day-and-a-half‚” Cook said.

“The ball makes divot marks on the pitch while it’s soft on the first day. When those marks hardened on day three and four‚ then it became difficult to bat.”

Even more difficult‚ you mean Jimmy.

This weekend’s Indian Premier League (IPL) player auction in Bangalore will serve as a barometer of how much has changed in South African cricket in ...
Sport
4 years ago