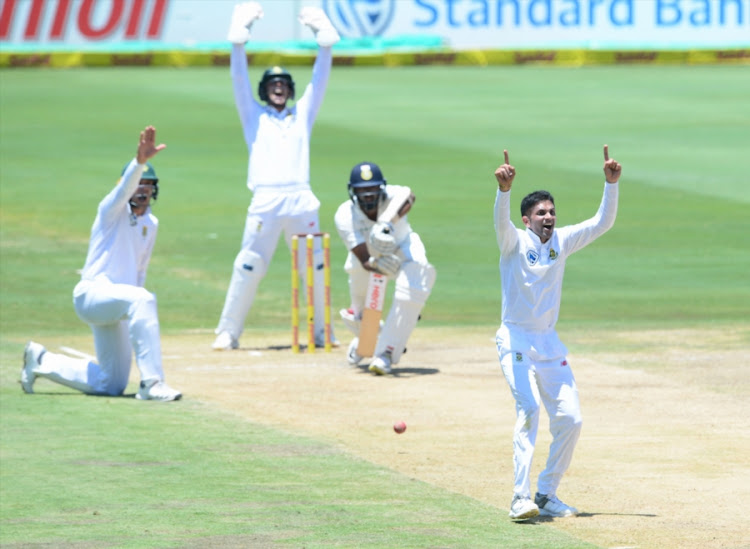 Keshav Maharaj of the Proteas during day 3 of the 2nd Sunfoil Test match between South Africa and India at SuperSport Park on January 15, 2018 in Pretoria, South Africa.
Image: Lee Warren/Gallo Images

SA captain Faf du Plessis has given the strongest hint yet that they may go without spinner Keshav Maharaj for the third and final Test against India at the Wanderers Stadium on Wednesday.

In the last two Test matches played here in Johannesburg against England in 2016 and Sri Lanka last year‚ the Proteas went for an all out pace attack and that trend is likely to continue as the Bullring wicket is expected to offer pace and bounce.

In the seven wickets loss to England two years ago‚ SA went with Morne Morkel‚ Hardus Viljoen‚ Kagiso Rabada and Chris Morris with Stiaan van Zyl and Dean Elgar assisting them with the slower ball.

They beat Sri Lanka by an innings and 118 runs with the bowling attack made up of Rabada‚ Wayne Parnell‚ Vernon Philander and Duanne Olivier while JP Duminy chipped in with the slower ball.

“Playing this match without a spinner is definitely something that we are speaking about in our selection meetings‚" Du Plessis said at the Wanderers on Tuesday afternoon.

"It is an option and it was also an option in Centurion.

"It doesn’t spin that much regularly here but we found out that it was the opposite in Centurion.

“We just want to make sure that we keep our options open and see what happens.

"The wicket looks like it will be the normal one but we will look again on Wednesday morning and see how it looks like.

"Keshav is an extremely talented spin bowler and we are lucky to have him.

If they go in the direction of attacking India with Lungi Ngidi‚ Rabada‚ Morkel and Vernon Philander‚ Maharaj’s place will be taken by either all-rounder Andile Phehlukwayo or Theunis de Bryun who have not featured in this series.

“The two options will be between Andile (Phehlukwayo) and Theunis (De Bryun).

"Whether we go for an all-rounder to give us that option in terms of batting and bowling or generally what you can do is to play seven batters and four seamers.

"Those are the combinations that we are talking about from a selection point of view.”

The Proteas were fined by the International Cricket Council (ICC) for maintaining a slow over rate in the second Test in Centurion but Du Plessis dismissed suggestions they may go with the four seamers to avoid another sanction.

“It is a headache at the moment but you don’t select teams based on over rates‚ you look at conditions and try to pick your strongest eleven‚” he said.

The Proteas go into this last match having won the series already but the South African skipper warned his players against complacency.

“I think that India will come back with a point to prove‚" he said.

"They are a proud team that will not want to go down three nil and we are expecting a good challenge from them.

"For us as a team we just have to do the things that we have been doing in this series.

"I said after the first Test that the difference between us and them was that the batters contributed partnerships‚” he said.

India are facing the embarrassing possibility of a whitewash by bitter rivals South Africa and the visitors' captain Virat Kohli hopes that internal ...
Sport
4 years ago