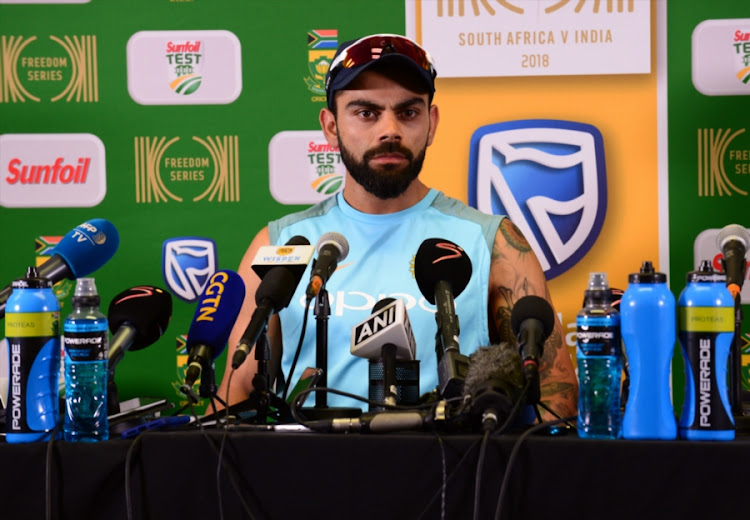 Virat Kohli of India during day 5 of the 2nd Sunfoil Test match between South Africa and India at SuperSport Park on January 17, 2018 in Pretoria, South Africa.
Image: Lee Warren/Gallo Images

It's expected that India should be salty about relinquishing the Test series against South Africa‚ especially after their second Test defeat.

With South Africa not being the most consistent side in the past two years‚ India fancied their chances of a historic series win‚ but alas‚ it didn't happen.

Had they squared the series at SuperSport Park‚ they would have had the comfort of playing at one of their favourite venues in the world: The Wanderers.

It's this simple: India have never lost to South Africa at the Wanderers and in two of the drawn Tests (1997 and 2013)‚ India let South Africa off the hook.

The 1992 bore-draw that was sparkled by Sachin Tendulkar's ton and Anil Kumble's 6/55 paled into insignificance when Shanthakumaran “Sree” Sreesanth inspired India to a 123-run win 14 years later.

The 2013 Test will always be remembered for South Africa's epic run-chase where they attempted to overhaul 458 and fell eight runs short with two wickets in hand.

With that series comprising of two Tests‚ it was always going to be incumbent on the hosts to make all the running but through centuries from Virat Kohli and Cheteshwar Pujara.

In the end‚ an anti-climatic draw was the safest result that allowed the side to turn the second Test into a shoot-out.

With so much history behind‚ India surely would have lined up this Test as one for the taking but winning in South Africa is not easy.

The Wanderers Test could have been Virat Kohli's crowning glory in his first full series in South Africa as India's captain.

He did all he could to drag them to parity in Centurion but the batting did not come to the part in the second innings.

Somehow though‚ the spectre of the Wanderers has always brought the best out of India's cricketers.

It was in the 1996/97 test where Rahul Dravid announced his arrival has a batsmen of reputable international class with innings of 148 and 81 while Sourav Ganguly also unfurled his graceful cover drives that were going to be the trademark of his career through two beautiful 50's.

Ganguly was to play a pivotal role nine years later as his first innings unbeaten 51 gave India a foothold they were to cement as the match progressed.

South Africa's record at the Wanderers is not the healthiest either as their tendency of going big or going home has seen them win and lose big.

However‚ India remain the only Asian side to have bested them in Johannesburg while Australia (five)‚ New Zealand (one) and England (two) have also claimed wins since 1992/93.

The Wanderers has never been South Africa's safe haven but there's a first time for everything‚ that includes their first ever series whitewash of India.