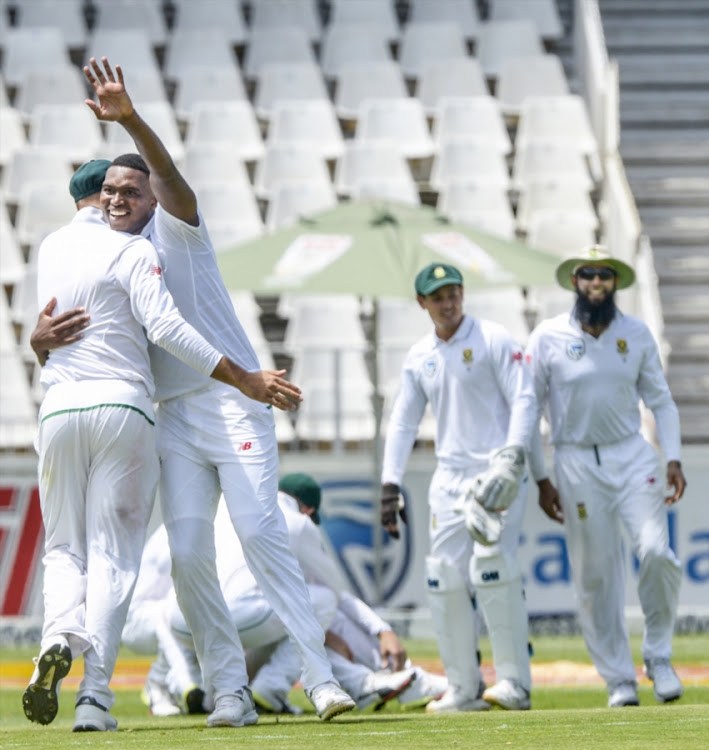 South African players celebrate with Lungi Ngidi for the dismissal of captain Virat Kohli of India during day 1 of the 3rd Sunfoil Test match between South Africa and India at Bidvest Wanderers Stadium on January 24, 2018 in Johannesburg, South Africa.
Image: Sydney Seshibedi/Gallo Images

The world's top ranked Test team made some decisions they may now lament on the opening day of the third and final Test against the Proteas at the Wanderers in Johannesburg on Wednesday.

India‚ already two-nil down and hoping to avoid a series whitewash‚ opted to take to the crease - and then found ways of vacating it. Not that South Africa's attack was undeserving of their bounty.

The Proteas' bowlers by far and large put the visitors under the necessary scrutiny by plugging away at a nagging line and length‚ but to be fair‚ the hosts were far from their ruthless best in the field.

Dropping Virat Kohli twice and having Ajinkya Rahane caught behind off a no-ball may have had disastrous consequences on a different day.

As it turned out‚ India were restricted to 187‚ with Kagiso Rabada claiming three scalps. In reply South Africa were 6/1 with Aiden Markram the man to depart.

Under leaden skies‚ Kohli opted to bat first‚ a decision that appeared puzzling given the fact that India's top order has shown little aptitude in mastering the South African pace attack in this series.

With the ball likely to deviate through the air and from the surface Kohli's decision could be interpreted as misguided bravado.

He is‚ however‚ a man of deep conviction and one can only wonder how the course of the series may have been altered had his grip on this team not been as firm as it is.

India‚ after all‚ tacitly acknowledged what they expect the ball to do by dropping spinner Ravichandran Ashwin for the seam threat of Bhuvneshwar Kumar. With Ashwin out of the picture India's tail is now as long as the Ganges.

Moreover‚ on a day that required grit and application at the crease‚ the tourists' injudicious shot selection further served to undermine the team's status in the global order of things.

They were hoping to ride the initial storm before asserting themselves in the afternoon but the plan which showed promise with captain Kohli and Cheteshwar Pujara at the crease‚ backfired as the sun shone on the hosts in the afternoon sessions.

Before and after lunch however it was a matter of who blinked first as the pair tried to wear down the Proteas' attack.

Kohli and Pujara had to tread carefully.

Earlier India's openers again rolled out the red carpet to their middle order. KL Rahul and Murali Vijay simply lack the application to deliver performances of substance at the top of the order on bouncy South African surfaces.

Vijay took six overs and four balls to get to the other end and by then Morne Morkel running in from the Corlett Drive End was starting to hit a troublesome length.

The openers presented catches to wicketkeeper Quinton de Kock off Vernon Philander and Rabada before Kohli and Pujara embarked upon the restoration of the innings.

It was a partnership upon which much depended. The pair seemed to bat with the weight of responsibility squarely resting on their shoulders and even the normally fluent Kohli yielded to circumspection.

It became a battle of wills as India laboured to lunch on 45/2. The sparse crowd had witnessed 10 maidens in first 16 overs.

Pujara had dug himself in‚ curiously‚ even before he troubled the scorers. It took him 54 balls to get off the mark.

He was becalmed before lunch and only sporadically sprung to life in the second session as he gingerly put away the half volley or rank long hop. His shot-making lacked conviction‚ not that‚ that was required of him. He pushed and prodded‚ and as is his wont‚ proved quite adroit at leaving.

It made his demise all the more ironic when he feathered a delivery he tried to leave.

His four-hour-22-minute vigil for 51 came off 73 deliveries. Only when the Proteas have had their stint at the crease will we know the true significance of Pujara's knock.

The Proteas finished in a strong position but they had better make smarter decisions than their rivals on day two.