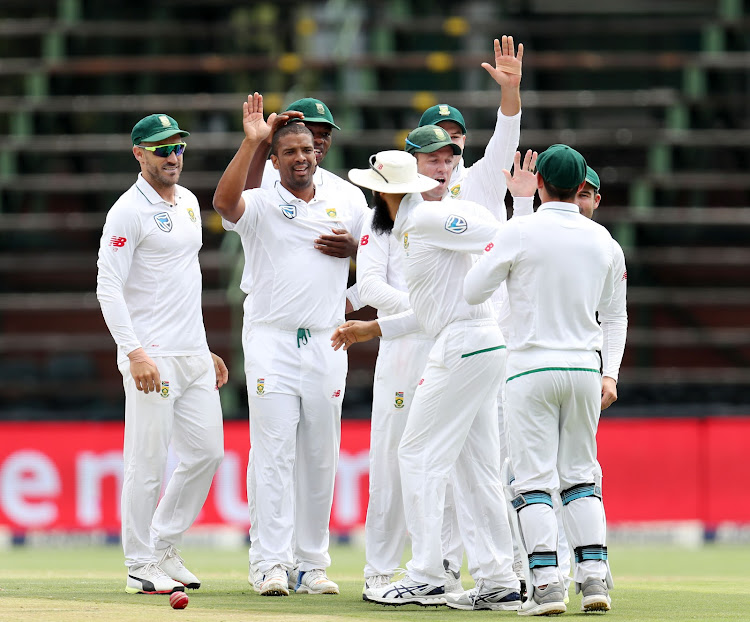 India were battling on 45/2 after 27 overs at lunch of day one of the third and final Test at Wanderers in Johannesburg after Vernon Philander and Kagiso Rabada removed openers KL Rahul and and Murali Vijay inside ten overs.

The visitors resumed after lunch with captain Virat Kohli on 24 off 58 and Cheteshwar Pujara on 5 off 66 and looking to considerably increase their slow partnership of 32 off 110.

India will once again rely heavily on their inspirational skipper Kohli who was dropped by Philander at mid-off in the 21st over on 11 from the bowling of Rabada.

Rabada was clearly not impressed as he dropped to his knees with his head in his hands.

There was a sarcastic loud cheer in the ground in the next over when Pujara finally registered his first run of the match after the 81 minutes he was on the crease. He nudged Lungi Ngidi behind square for a single.

Pujara should not have been on the crease when he finally got his first run as South Africa missed a trick after failing to review the previous ball. The hawk eye showed that he could have been out as the ball brushed his front pad.

The first wicket to fall on the day was that of Rahul who was caught behind by Quinton de Kock without scoring from the bowling of Philander after four overs.

In the ninth over‚ India’s problems heightened when Vijay departed.

He was caught by De Kock when he unnecessarily went for a ball that was clearly going outside off stump.

On a lively and greenish Wanderers pitch‚ the Proteas went for an all out seam attack of Rabada‚ Philander‚ Morne Morkel and Ngidi with all-rounder Andile Phehlukwayo coming on for spinner Keshav Maharaj in the only change.

India‚ on the other hand‚ made two changes to the side that lost in Centurion with top order batsman Anjinkya Rahane replacing Rohit Sharma and Bhuvneshwar Kumar coming on for spinner Ravichandran Ashwin.

Just like South Africa‚ India went into this match without a spinner as they opted for four seamers in the form of Kumar‚ Mohammed Shami‚ Ishant Sharma and Jasprit Bumrah with Hardik Pandya as their all-rounder.