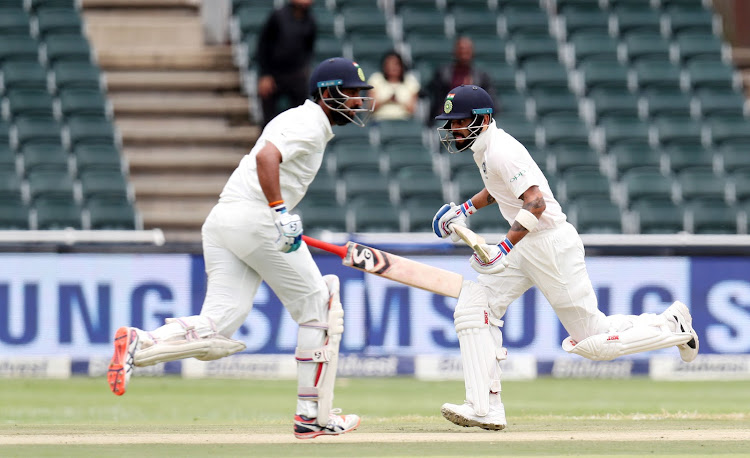 Virat Kohli and Cheteshwar Pujara were contrasting batting studies in terms of how to deal with difficult batting situations.

It was a pity the duo couldn't capitalise on their starts‚ but they've provided India with a template they'll need to apply when they go to England later this year.

They won't come across conditions as close to what's found in the United Kingdom when Bethuel Buthelezi dished out a surface pregnant with movement off the seam while the muggy overhead conditions made swing an easy proposition for the bowlers.

Pujara's almost always under pressure to justify his position in the team because of his inability to dominate attacks but he was the necessary defensive yang to Kohli's attacking ying.

Then again‚ there also was the benevolence of South Africa's unusually sloppy fielding that gifted Kohli two lives on 11 and 32.

It was a good thing Vernon Philander's initial reprieve was in the morning session when kids were at school as Kagiso Rabada's reaction was unprintable.

The red rag was waved for the Indian bull that is Kohli and the skipper went for it.

Having scorched the Proteas attack all around SuperSport Park in the second test‚ the bounty on Kohli's head was priceless and to give him a let-off was tantamount to hara-kiri.

In that event‚ Kohli also gave a short masterclass in terms of how to deal with beautiful bowling in enabling conditions.

While Pujara dug himself into the proverbial shotless hole in taking 54 ball to get off the ball‚ Kohli's controlled belligerence made sure runs were scored when the rare bad ball presented itself.

Not all of Kohli's shot-making was on the string.

The fuller length sought the South African bowlers disconcerted him and asked questions of his driving ability.

When it came off‚ it provided the stadium ultra-violet rays that were obscured by the morning cloud but it was the sword that he died on when his growing menace Lungi Ngidi prised him from the crease.

The fact that Kohli's and Pujara's 84-run alliance spanned 206 balls owed much to their reasonably decent judgement and ability to weather the early storm.

Pujara's vigil could have and should have amounted to something more.

Not many batsmen score five runs in 66 balls during the course of a session and live to tell the story.

The fact he wasn't able to convert his start into something substantial made a mockery of the monumentally monastic concentration he displayed when Philander toyed with his technique.

India's two senior batsmen could not quite bring home the bacon what seemingly started to look like a sequel of their epic 2013 partnership before Kohli was removed from the equation.

It was gritty and compelling while it lasted‚ but with the ruthlessness of this South African bowling attack‚ good things don't just come to a delight end‚ they are mercilessly asphyxiated.

Donald Trump has nothing on Greg Fredericks. Neither does Kim Jong-un.
Sport
4 years ago