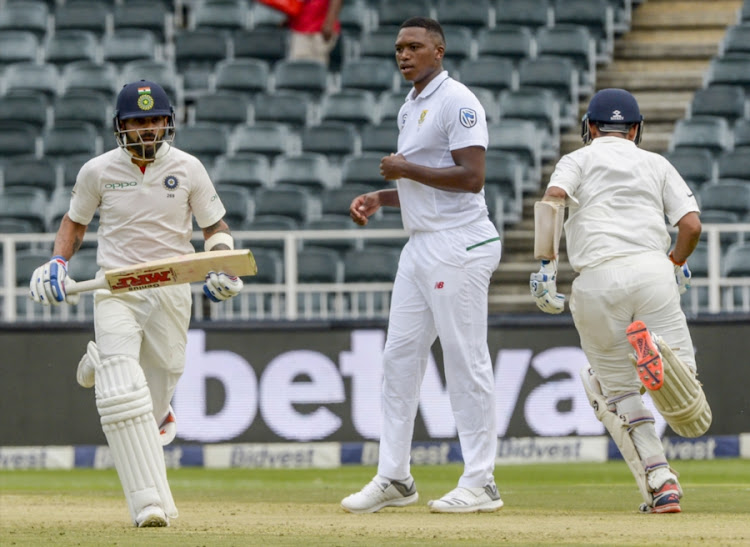 Virat Kohli and Cheteshwar Pujara of India in partnership during day 1 of the 3rd Sunfoil Test match between South Africa and India at Bidvest Wanderers Stadium on January 24, 2018 in Johannesburg, South Africa.
Image: Sydney Seshibedi/Gallo Images

Donald Trump has nothing on Greg Fredericks. Neither does Kim Jong-un.

“I’ve got three buttons on my desk‚” Fredericks‚ the chief executive of the Gauteng Cricket Board‚ said at the Wanderers on Tuesday night.

“I’ll push the first one at three o’clock — rain!

Unusual as it is for the suits‚ especially the rare respectable specimens among them‚ to want play interrupted‚ Fredericks had a point.

Starting a match in workaholic‚ user-unfriendly Johannesburg on a Wednesday is not unlike opening a tap in Cape Town these days: a very bad idea.

Blame the suits’ greed‚ which leads to ever more cricket being force fed down the game’s clogged throat‚ which leads to playing schedules designed for machines and not people.

Or blame Virat Kohli’s wedding reception‚ which — if you believe this theory — is why India couldn’t arrive in South Africa in time to play a Boxing Day test.

So here we are‚ looking out at the veritable 4am parking lot in which South Africa and India are playing the third Test.

You can‚ can’t you‚ hear Danny Morrison screeching from a television: “At the Wanderers! On a Wednesday!”

All will be forgiven if the match survives into days four and‚ perchance‚ five — Saturday and Sunday‚ when Joburg takes a break from its willfully wearying weekdays and goes to things like shopping malls and cricket matches.

That’s what Fredericks is hoping hard will happen‚ and if he has to conjure a few environmental stalling tactics to get there‚ what the hell.

But he’s between a rock and a hard place. Or‚ in this case‚ between a pitch as green with grass as the stands are bleak with emptiness.

After all South Africa’s childish churlishness about the Centurion pitch‚ nevermind that they won the second Test handsomely‚ the surface at the Wanderers was in danger of being rendered as a caricature of itself.

That it has instead emerged true to its character — that of a hungover taxi driver on Louis Botha Avenue at rush hour — is a credit to its creators‚ Bethuel Buthelezi and Chris Scott.

But that means days four and five are slipping over the horizon of possibility‚ particularly with South Africa bowling like rattlesnakes and India batting like rattled snakes.

There were‚ at least‚ more spectators in the stadium than‚ given the conditions‚ there were spinners in both XIs: none. Two of them came all the way from Kloof‚ near Durban‚ to keep an eye on their son.

Along with the bright lights and the big city‚ the Ngidi's saw their youngster concede only three runs in his first spell of five overs and Vernon Philander bowl seven spotless maidens in his first eight overs.

They saw the ball swing like a Dixieland jazz band‚ seam as if it had hit the edge of a concrete slab and bounce like a Jack Russell on a trampoline.

They saw Cheteshwar Pujara take 54 balls to creak off the mark‚ a player as polished as Kohli succumb to strokes that would have a made a Country Districts No. 11 blush‚ and AB de Villiers drop a slip catch they would have taken with one hand while stirring a cup of tea with the other.

They saw De Villiers redeem himself by holding a screaming edge that felled him as violently if he had been shot.

With that‚ they saw their kid dismiss Kohli for the second time in the series.

They saw a lot. But‚ by 3pm on Wednesday‚ they hadn’t seen any rain.

That might make you wonder what the third button on Fredericks’ desk does.

He never did say. Must be the nuclear option: bat properly‚ you mooks.

Emerging South African fast bowler Lungi Ngidi claimed the huge scalp of Virat Kohli as India went to the tea break on the first day of the third ...
Sport
3 years ago

India were battling on 45/2 after 27 overs at lunch of day one of the third and final Test at Wanderers in Johannesburg after Vernon Philander and ...
Sport
3 years ago

Five things India have to do to avoid a Test series whitewash when they play South Africa in the third Test at the Wanderers starting on Wednesday.
Sport
3 years ago

SA captain Faf du Plessis has conceded that this weekend’s Indian Premier League (IPL) auction could cause unwanted disruptions in the Proteas camp.
Sport
3 years ago