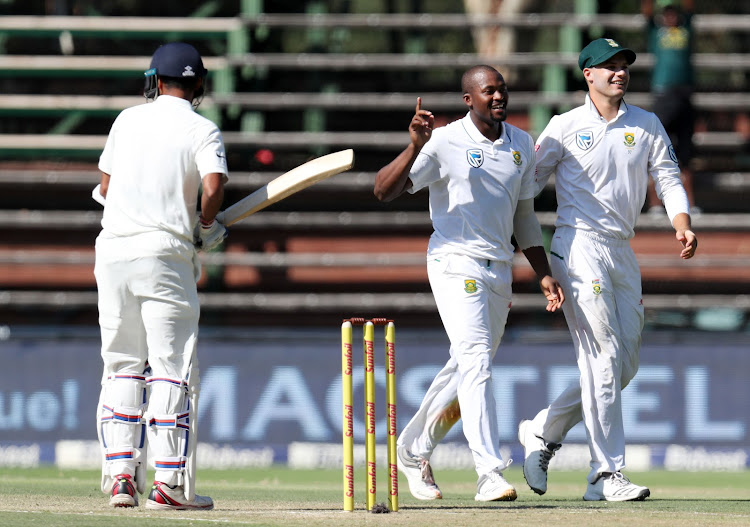 SA all-rounder Andile Phehlukwayo says they had a good outing on the opening day of the third Test on Wednesday after they bowled out India for 187 before close of play and he returned with personal figures of 2/25 in seven overs.

Phehlukwayo was the only change to the Proteas team from the second test in Centurion last week and he replaced spinner Keshav Maharaj‚ assisting front line seamers Kagiso Rabada‚ Vernon Philander‚ Morkel Morkel and Lungi Ngidi.

“I think we did have a good day‚" Phehlukwayo said ahead of the second day on Thursday.

"It is a good wicket and our efforts on the field were really good bar a few mistakes here and there.

"The score of 187 is good‚ the guys did put the ball in the right areas and we were rewarded.

"We tried to bowl a bit fuller.

"A few times we might have got it wrong and that happens‚ but there is a bit of movement and it is a good wicket to bowl‚” he said‚ adding that his role was to restrict the run rate.

“There are four upfront seamers in the team.

"I am the fifth one and my job was to try and hit the length‚ hit top of off stump and hopefully expose if there is a nibble on the wicket.

"It was also to try to restrict the runs by bowling as many dot balls as I can and hope that a batter can make a mistake and I get a wicket.”

The Wanderers pitch had assistance for the South African seamers and India’s batsman Cheteshwar Pujara‚ who scored his 50 runs off a whooping 179 balls‚ said their total of 187 was as good as 300 on any type of wicket.

“This is one of the toughest pitches I have played on‚" he said.

"It has a lot of bounce‚ movement and there is enough pace now.

"So we had to work hard to score runs but the total we have‚ I think it is as good as scoring 300 on any wicket.

"As we saw‚ we got a wicket before close of play and if we bowl well I think we will get them out.

Donald Trump has nothing on Greg Fredericks. Neither does Kim Jong-un.
Sport
4 years ago