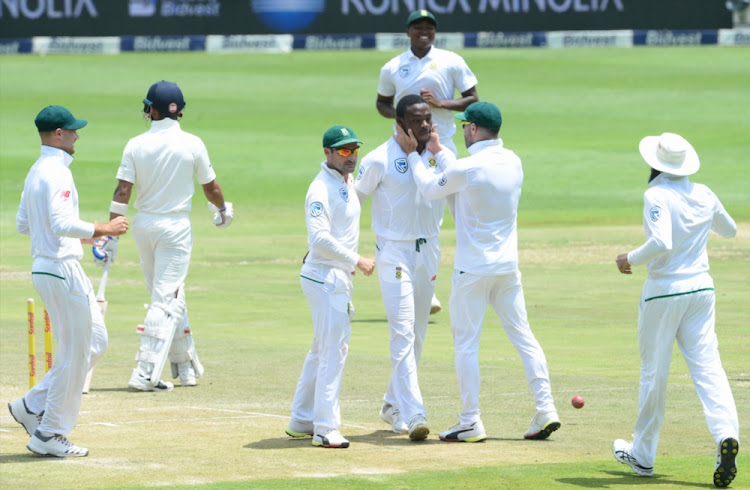 Kagiso Rabada of the Proteas celebrates the wicket of Virat Kohli of India with Faf du Plessis of the Proteas during day 3 of the 3rd Sunfoil Test match between South Africa and India at Bidvest Wanderers Stadium on January 26, 2018 in Johannesburg.
Image: Lee Warren/Gallo Images

The treacherous pitch which is continuing to cast a shadow over the third and final Test of the Freedom Series between South Africa and India is exactly what the Proteas asked for.

That's what respected Wanderers pitch consultant Chris Scott had to say about the heavy criticism the pitch has come under by former players - as well as some of the cast currently assembled on the playing surface.

With talk of the match potentially being abandoned‚ Scott was initially loath to comment on the state of the strip.

“Firstly‚ I cannot comment on the way the pitch was prepared because I am not the groundsman. I'm just a consultant‚” said Scott‚ the erstwhile head groundsman at the venue before Bethuel Buthelezi took over in 2015.

“The pitch has been prepared according to the request of the South African team and I'm not at liberty to discuss what that was‚” said Scott.

Asked if he has been surprised at the way the pitch has behaved‚ Scott said: “The only thing I'm surprised about is that no-one has as

What Scott was referring to were the divots and cracks that have made batting trickier than it ought to be on the first three days of a Test. Batsmen have frequently been hit on the glove and Hashim Amla was hit in the ribs on the second day.

Former Indian batting legend Sunil Gavaskar was scathing in his assessment of the pitch after the second day and even the usually unflappable Amla admitted it was unexpectedly rough.

“It is probably one of the toughest I have played on. Recently I played in England and there were a couple of tough wickets there‚ but this one has a lot of pace and bounce‚” Amla said after the second day. “It is a spicy wicket and we can’t hide from the fact that you can get out every ball‚ and it is challenging as a batsman.”

Although the umpires had concluded at lunch that they don't deem the pitch dangerous‚ TimesLIVE understands they made it clear they may alter their stance as the match unfolds.

The Wanderers pitch‚ renowned for its pace and bounce‚ has misbehaved since day one‚ with ever-widening cracks making batting a perilous pursuit. Batsmen have been struck by deliveries off a decent length and the umpires Aleem Dar and Ian Gould have on more than one occasion conferred to discuss the state of the strip.

India reached stumps on the second day of the third and final Test at the Wanderers on 49/1 and leading South Africa by 42 runs and with nine ...
Sport
3 years ago

They had an animated conversation with ground staff at the end of the first session on Friday.

Scoring too has been influenced by the uncertainty created by the pitch.

Since readmission the team batting first in Test matches at the Wanderers has averaged 302.

India spluttered to 187 in their first stint at the crease and South Africa replied with just seven runs more.

Should the match be abandoned due to a dangerous pitch it could have severe consequences for the Wanderers. It could lose its right to stage another Test in the next 12 months‚ which will necessitate a change of venue for the final Test against Australia in March.

On only one other occasion has a Test been abandoned because of a dangerous pitch. That match involved the West Indies and England at Sabina Park in Jamaica in 1998.

On local soil‚ it would not be the first time that a dangerous pitch caused the abandonment of a tour match. In December 1994 New Zealand's first-class game against Boland at the then newly build Boland Park was abandoned after just one over on the second day after the batsmen were repeatedly hit by deliveries off a decent length.

That all was not well was evident on day one when Boland were dismissed for 83 in their first innings and New Zealand replied with 86. With Boland 31/3 in their second innings umpires Cyril Mitchley and Brian Jerling decided they had seen enough and duly lifted the bails on a match that has lived long in South African cricketing infamy.