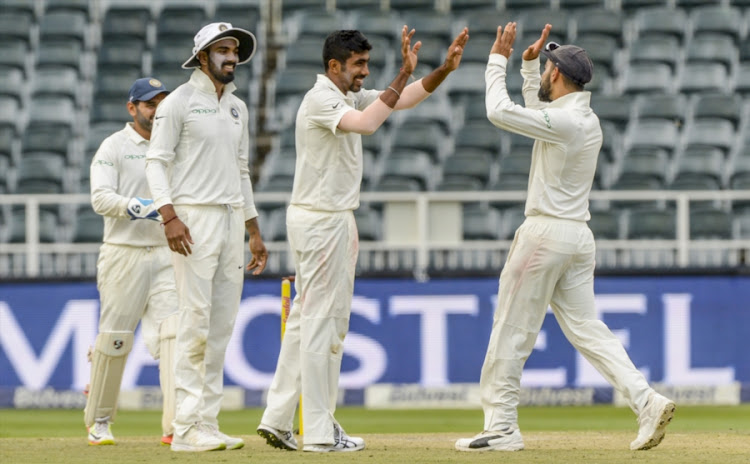 India bounced back in fine style to restore some pride when they beat South Africa by 63 runs with a day to spare in a highly absorbing third and final Test match at the Wanderers Stadium in Johannesburg on Saturday afternoon.

The Proteas went into this match having already won the series following victories in the Cape Town and Centurion but India prevented an embarrassing whitewash while at the same time preserved their unbeaten record here in Johannesburg as the series end 2-1.

On a pitch that was the talking point for most of the match this week because of its uneven bounce which forced early stumps on Friday for the safety concerns, Indian bowlers recovered from a frustrating and wicketless first session on Saturday morning to claim nine scalps and win the match.

Before lunch, Hashim Amla and Dean Elgar looked good with a partnership of 119 runs on the wicket this that was treated with a heavy roller in the morning as they also added 52 runs to the overnight score 17/1but things feel horribly apart in the second and third sessions.

Elgar finished the innings unbeaten on 86 off 240 balls as he watched helplessly wickets tumble in front of his eyes on the other end with nothing much he could do about it.

South Africa lost Amla (52) and AB de Villiers (6) before tea and the hosts never recovered as captain Faf du Plessis (2), Quinton de Kock (0), whose place in this Test side team is under scrutiny, continued to tumble in the third session.

They were followed back to the pavilion by Vernon Philander (10), Andile Phehlukwayo, Kagiso Rabada and Morne Morkel, who all departed without scoring, and Lungi Ngidi for four as India registered their third win in South Africa.

The stars of the show for India with the bat were Mohammed Shami, who returned with a five wicket haul, Jasprit Bumrah and Ishant Sharma with two each and Bhueneshwar Kumar who claimed one scalp while Hardik Pandya finished empty handed.

SA lose AB and Amla but edge towards victory

South Africa need 105 runs to beat India in the third and final Test at Wanderers and register a monumental series whitewash over their bitter rivals.
Sport
3 years ago

Joburg has always been a tough place to drive a car‚ ride a bike‚ walk‚ run‚ be a kid‚ be a woman‚ be a bloke‚ get a job‚ stay out of trouble‚ stay ...
Sport
3 years ago

The Wanderers pitch behaved better‚ with less uneven bounce‚ in the first session of day four of the third test on Saturday morning where South ...
Sport
3 years ago

The third test between South Africa and India will continue at the Wanderers on Saturday despite doubts over the suitability of the pitch, the ...
Sport
3 years ago