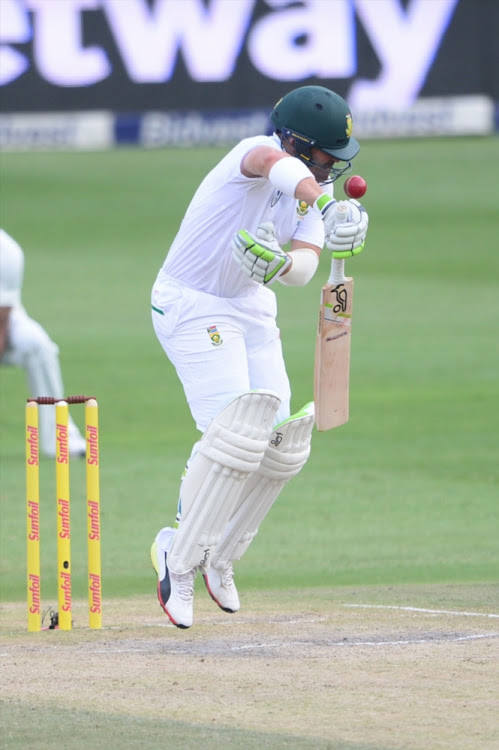 Dean Elgar of the Proteas hit on the head by Jasprit Bumrah of India during day 3 of the 3rd Sunfoil Test match between South Africa and India at Bidvest Wanderers Stadium on January 26, 2018 in Johannesburg.
Image: Lee Warren/Gallo Images/Getty Images

Joburg has always been a tough place to drive a car‚ ride a bike‚ walk‚ run‚ be a kid‚ be a woman‚ be a bloke‚ get a job‚ stay out of trouble‚ stay alive. And bat.

For instance‚ in the 19 top-flight Currie Cup matches played at the Wanderers in the five seasons from 1987-88 to 1991-92‚ only five centuries were scored.

As many as 760 batsmen could have taken guard in those games. And just 0.66% of them made it to a hundred.

Those were the days. Of hard bastards and harder bastarder pitches. Of no such thing as sanctions for surfaces that were deemed below standard.

No longer. As from January 4‚ a pitch rated as “below average” by the International Cricket Council (ICC) will be given a demerit point. If it’s “poor” that becomes three demerit points. “Unfit” translates to five demerit points.

Points will remain on a ground’s record for five years and an accumulation of five points will see that venue banned from hosting international matches for 12 months. Ten points gets you a 24-month ban.

That brings us back to Wanderers‚ circa Saturday‚ and the 22 yards of trouble that is the stage for the third test between South Africa and India.

The fourth one-day international on February 10 — the “pink ODI” that raises millions for charity — and the first T20 eight days later are both scheduled to be played at the Wanderers. And both are already sold out.

If the test pitch is slapped with five demerit points — and thus a ban — Cricket South Africa could conceivably drag out the appeal process long enough to save the ODI. But the T20 would have to be moved.

The ICC‚ in the shape of umpires Ian Gould and Aleem Dar and match referee Andy Pycroft‚ told us what they think of the test pitch on Friday when they cleared the field immediately after a short delivery from Jasprit Bumrah clanged Dean Elgar on the grille of his helmet.

That marked the ninth time in not quite nine sessions of play that batsmen had received medical attention after being struck by deliveries‚ mostly on their hands.

“The on-field umpires will continue to monitor the pitch‚ and consult the match referee should the pitch deteriorate further‚” the ICC said in a release more than three hours after the incident.

The Wanderers pitch behaved better‚ with less uneven bounce‚ in the first session of day four of the third test on Saturday morning where South ...
Sport
4 years ago

“The welfare of the players is paramount and two of the most experienced match officials are in charge of the game and will take appropriate decisions.”

Elgar passed a concussion test but‚ cruelly‚ when play resumed on Saturday — an hour late because an early morning thunderstorm — he had to face Bumrah‚ who was midway through an over at the abrupt end of Friday’s proceedings.

Bumrah’s first delivery was a bouncer of cartoon proportions that sailed harmlessly perhaps a metre over Elgar’s head and went for five wides.

But the next ball pitched on the left-hander’s legs and jagged across him and upward threateningly. Once bitten‚ twice shy‚ Elgar tried to jerk his hands and head out of the ball’s path‚ clearly alarmed. He was hit on the fingers‚ but not injured further.

Of course‚ given cricket’s strange sense of humour‚ and perhaps the judicious use of the heavy roller‚ not a wicket fell before lunch on Saturday.

The third test between South Africa and India will continue at the Wanderers on Saturday despite doubts over the suitability of the pitch, the ...
Sport
4 years ago

Elgar blocked the last ball of the session and turned on his heel and marched off towards the dressingroom without bothering to confirm with the umpire that lunch was indeed upon us.

Earlier‚ during the warm-up game of football on the outfield‚ Elgar headed the ball. His unwiseness was instantly obvious: he grimaced and put a hand to his face.

While groundstaff were busy drying the field‚ the Wanderers’ speakers blared with Kurt Darren’s “Kaptein Span die Seile” — a hardy standard at Centurion‚ where the pitch for the second test was roundly condemned by the South Africans for being subcontinental in character. It doesn’t look so bad now‚ does it?

But the Wanderers’ safety standards can’t be questioned in other aspects.

“Someone could get hurt by that‚” he said.